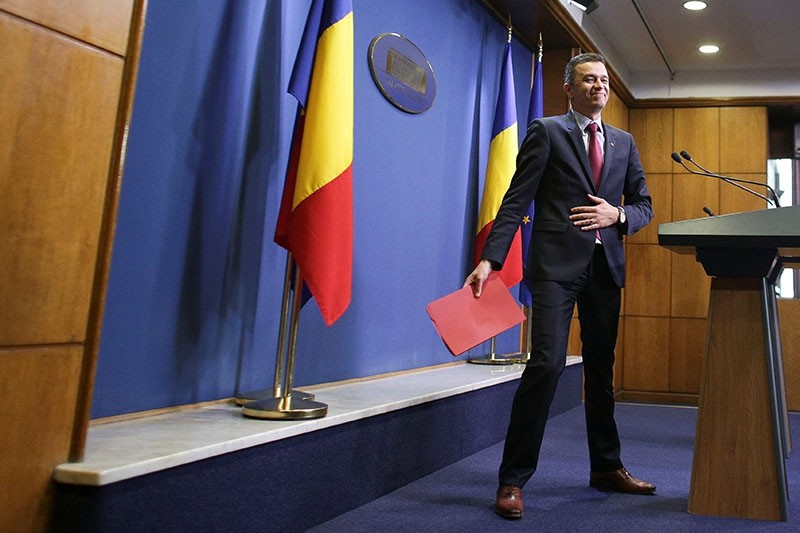 Romania's prime minister and his government were ousted Wednesday in a no-confidence vote submitted by members of his own party.

A total of 241 lawmakers from the PSD and its small coalition partner, the ALDE party, approved the motion, more than the 233 votes required. The governing Social Democratic Party filed the motion to oust Prime Minister Sorin Grindeanu, saying that he had failed to implement the party's political agenda. No opposition party participated in the vote.

43-year-old Grindeanu, in office since January, had refused to resign and rejects the assessment of his performance. He claims powerful party leader Liviu Dragnea wants to replace him with a party loyalist.

"This is a sad day for us. The premier did not perform," Dragnea told lawmakers before the vote Wednesday. "It didn't go badly, it went quite well, but that's not enough."

54-year-old Dragnea himself is barred from being prime minister because of a 2016 conviction for vote-rigging.

Speaking from the government offices, Grindeanu later said he would remain in office until a new government is installed.

He said it was "important we get out of this blockage and send a message to investors and governments all over the world that Romania remains a stable and predictable environment."

After the vote was announced, some Social Democrats hugged each other. The party will now choose a candidate for prime minister who needs to be nominated by President Klaus Iohannis. Talks with the president are scheduled for Monday and Iohannis has the right to refuse a candidate. Parliament then votes to approve the new government.

Iohannis will meet with party leaders on June 26 for the formation of a new government.

Romania's economy has been doing well, enjoying the fastest growth rate -- 5.6 percent -- in the EU in the first quarter, while efforts to tackle corruption have begun to bear fruit.

But the country of 20 million inhabitants can ill afford political instability, with the International Monetary Fund and the European Commission warning more reforms are sorely needed.

It is the second major crisis to hit the PSD since it rode back into power in December, barely a year after being forced from office over a deadly nightclub blaze blamed on corruption.

In February, Romania's largest protests since the fall of communism forced the government to drop a bill aimed at watering down anti-corruption laws that critics said would help Dragnea himself.

Analysts say Grindeanu's fall from grace might be linked to his perceived failure to push through the legislation.

Dragnea is also fighting another case against him for alleged abuse of power.