UK PM May under pressure from Tory ministers, opposition to ease austerity 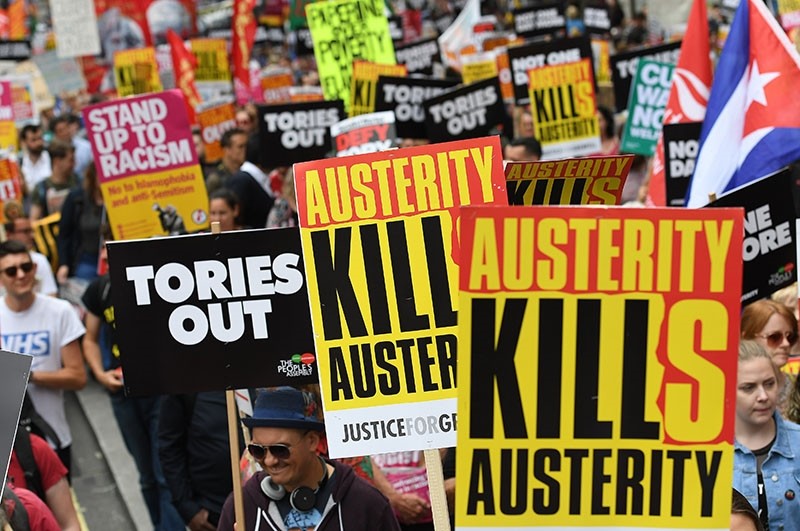 People hold placards reading 'Austerity Kills' and 'Tories out' as they take part in an anti-austerity demonstration outside Parliament in London, Britain, July 01, 2017. (EPA Photo)
by Compiled from Wire Services Jul 02, 2017 12:00 am

Key government ministers are pressuring Conservative British Prime Minister Theresa May to ease austerity and remove a pay cap for public sector employees as a new poll shows her popularity has slumped.

The Observer newspaper said Sunday that Health Secretary Jeremy Hunt is lobbying to lift the 1 percent cap on pay increases for National Health Service workers after a government report warned of staff shortages.

The Telegraph reports Education Secretary Justine Greening wants the government to abandon plans to cut per pupil spending, which would cost an additional 1.2 billion pounds ($1.6 billion).

The pressure on May is not only confined to calls from her own cabinet. Thousands of people marched through London on Saturday to protest over austerity and demand Prime Minister Theresa May's government resign after its disastrous showing in last month's election.

Demonstrators converged in front of the BBC headquarters in central London to demand an end to belt-tightening that has led to cuts in spending for public services.

Many brandished signs and placards reading: "No More Austerity", "Cuts Cost Lives" and "Tories Out."

After holding a minute's silence in honor of the victims of a deadly fire in London, which killed at least 80 people, and staging a round of applause for the emergency services, protesters headed towards Parliament Square.

Main opposition Labour Party leader Jeremy Corbyn took to the stage to blast the Conservatives' spending program, describing it as "brutal and selective to the poorest people and the poorest parts of our community".

The union-backed march was organized a day after the June 14 Grenfell Tower inferno in west London.

An investigation into the fire is under way, but critics blame lax standards and cost-cutting, which they say is a consequence of austerity.

The pressure comes after a disastrous election in June in which May lost her parliamentary majority amid calls to end seven years of austerity.

It pushed her into a deal with a small Eurosceptic, ultra conservative and Northern Irish Protestant party, the Democratic Union Party (DUP). May's government narrowly survived a confidence vote on Thursday thanks to the support of DUP.

Their deal has been attacked by both Labour and some of May's own Conservative MPs, in part because the DUP secured an extra billion pounds (1.1 billion euros/$1.3 billion) in state aid for Northern Ireland.

The opposition Labour Party fared better than expected in last month's election with its promises of measures such as the end to a 1 percent cap on public sector pay increases.

A day earlier, the government had also narrowly voted down a Labour Party amendment to its legislative program -- known as the Queen's Speech -- calling for an end to a six-year cap on public sector pay.

Funding for public services -- from the National Health Service (NHS) to police and fire personnel -- has taken an increasingly emotive tone in the U.K. after the country was struck by three terror attacks, followed by the deadly tower blaze.

May's alliance with the ultra-conservative DUP has also raised concerns across Britain because of the party's stance on same-sex marriage and abortion.

The DUP's opposition to same-sex marriage makes Northern Ireland the only part of the UK and Ireland where homosexual marriage is not allowed by law, despite widespread public support.

According to a June 2016 survey by pollster Ipsos Mori, 70 percent of adults in Northern Ireland believe homosexual couples should be allowed to marry each other.

Thousands of people descended on Belfast on Saturday to protest the DUP's stance and demand the law be changed to be in line with the rest of the union.