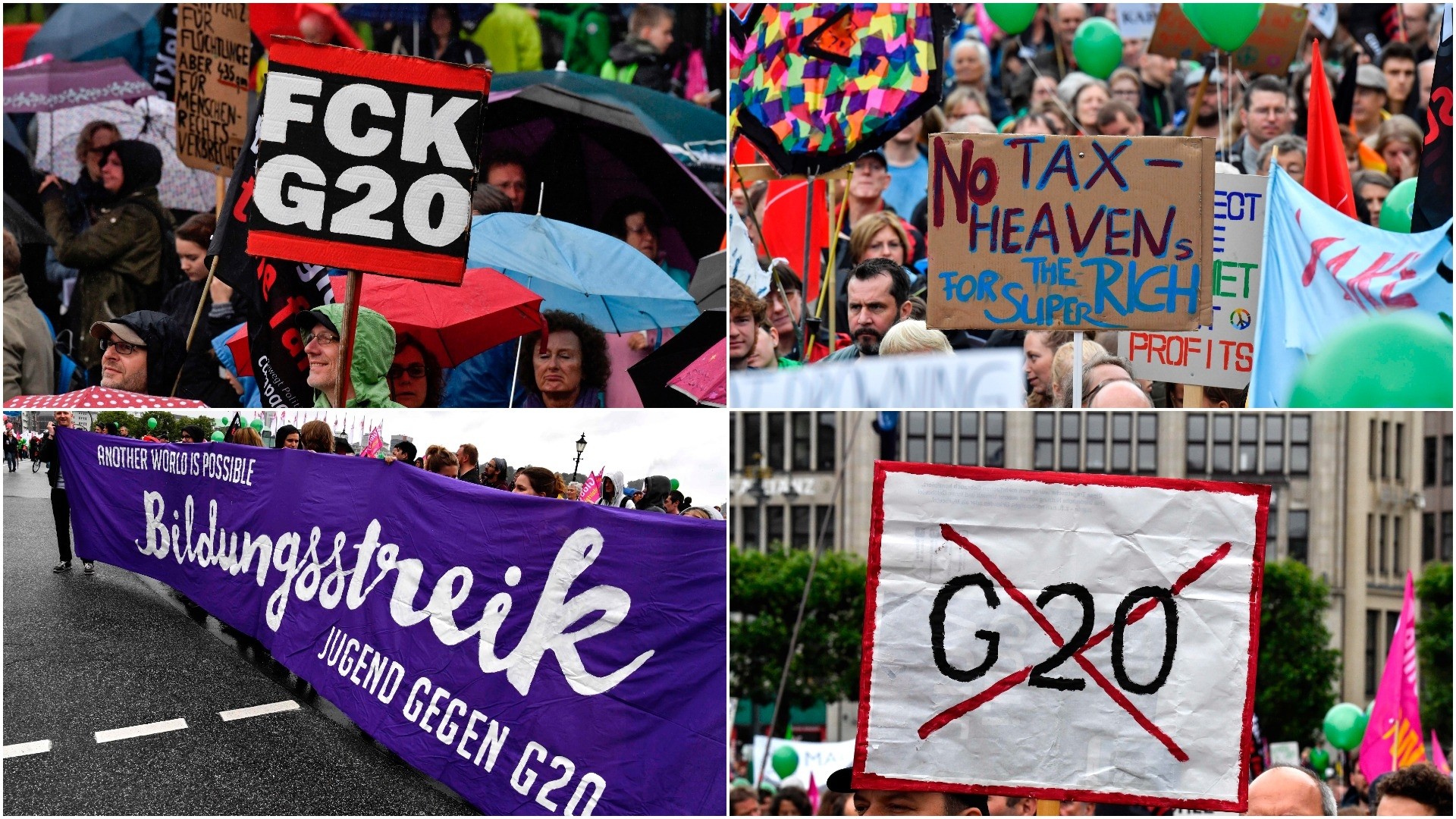 Participants hold placards during a demonstration called by several NGOs ahead of the G20 summit in Hamburg on a rainy July 2, 2017. (AFP Photo)
by Compiled from Wire Services Jul 02, 2017 12:00 am

They are held in locations that are easily shielded from demonstrators. And policy differences are papered over by envoys behind closed doors well ahead of time.

But the G20 meeting in Hamburg this week will be different.

Tens of thousands of demonstrators began marching against the meeting in the rain in Hamburg on Sunday in a prelude to the July 7-8 gathering, where 21,000 police from across Germany will protect the meetings of the world's 20 largest economies.

Ahead of the summit, the German government has played up the fact that protesters will be allowed to voice their opposition to the event. The government says its message is clear: tolerance for public dissent is a cornerstone of a confident, open democracy.

"We are a country where people have a right to demonstrate," said Merkel's spokesman Steffen Seibert. "Every citizen has a right to protest. And that counts for the G20 too."

That message has put huge pressure on German police. If they cannot keep the peace, Hamburg officials have acknowledged, it will amount to a defeat for Merkel in her own backyard.

In addition to some 20,000 police, dogs, horses and helicopters and 7.8 kilometers (4.8 miles) of steel barriers will be deployed.

With all the extra measures, German authorities are trying to brace for trouble in Hamburg, worried that the protests could turn violent as they did outside a G8 summit in Genoa, Italy in 2001 when one person was shot dead and hundreds injured.

The German Federal Crime Office warned that violent G20 opponents could carry out arson and sabotage at infrastructure targets such as the Hamburg harbor and airport, newspaper Welt am Sonntag said on Sunday.

"New and creative forms of attack have to be watched out for," the report said. It added Hamburg police are bracing for attempts by activists to disrupt electrical power in Hamburg.

Sunday's demonstration was organized by a group called "Protest Wave G20", with 50,000 to 100,000 protesters expected on an afternoon march through the city center. Other demonstrations this week are called "Welcome to Hell" and "G20 Not Welcome".

"The policies of the G20 have created hellish conditions in many countries around the world," Andreas Blechschmidt, one of the organizers of the July 6 protest, told Reuters in front of the Rote Flora, which stands just a few hundred meters from the site where the leaders will meet.

"We want to show them that we can turn up the heat too," he said. Behind him, a large banner reading "Capitalism will end anyway, you decide when" hung from the graffiti-covered squat.

With an eye on the anti-globalization protests brewing in Hamburg before the G20 summit, Chancellor Angela Merkel said that leaders will have to focus on sustainable and inclusive economic growth rather than their own prosperity.

Without mentioning the protests that have German security officials worried about possible acts of sabotage this week in the country's second-largest city, Merkel noted that these non-traditional issues were forced onto the G20 agenda.

"If we simply try to carry on as we have in the past, the worldwide developments will definitely not be sustainable and inclusive," she said. "We need the climate protection agreement, open markets and improved trade agreements in which consumer protection, social and environmental standards are upheld."

The G20 meeting follows a G7 summit in Sicily a month ago that exposed deep divisions between other Western countries and Trump on climate change, trade and migration. Trump later announced he was pulling the United States out of a landmark agreement to combat climate change reached in 2015 in Paris.