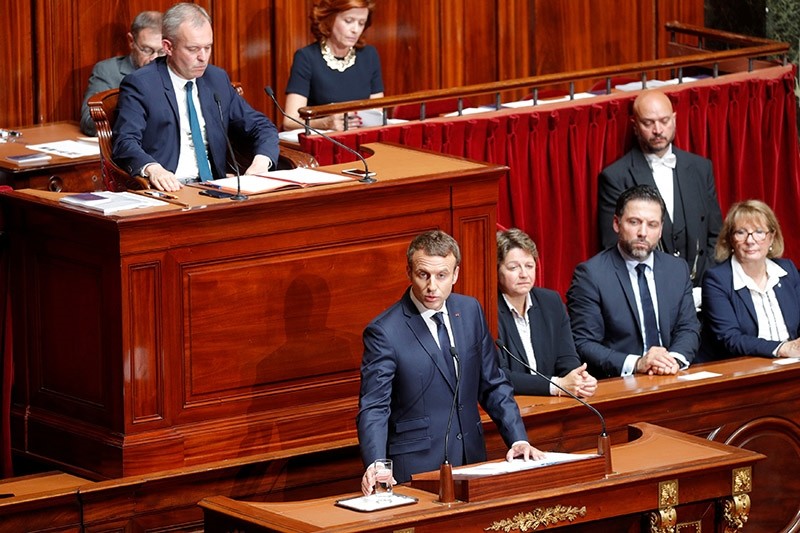 French President Emmanuel Macron delivers a speech during a special congress gathering both houses of parliament (National Assembly and Senate) at the Versailles Palace, near Paris, France, July 3, 2017. (Reuters Photo)
by Compiled from Wire Services Jul 03, 2017 12:00 am

French President Emmanuel Macron has pledged to lift the state of emergency, which has been in place since the 2015 terror attacks, but also to harden permanent security measures to fight terrorism and other threats.

He insisted on the need to "guarantee full respect for individual liberties" amid concerns that new measures would allow police too many powers.

Speaking at a special parliamentary session Monday in Versailles, Macron promised to "restore the freedoms of the French" after nearly two years under a state of emergency. He promised to lift it in the autumn.

He promised tougher new measures to prevent any new attack "without pity ... without weakness."

He spoke two days after authorities charged a young man with plotting a possible attack against the president or minority groups.

The 39-year-old French leader, elected in May, also laid out a series of proposals including a new law that will reduce the number of lawmakers in both houses of parliament by one third.

He also proposed that the electoral system be changed to allow more proportional representation "so that all tendencies are fairly represented (in parliament)".

Macron said he wanted all the "deep transformations... that our institutions badly need" to be completed within a year.

"I want... us to avoid half-measures and cosmetic arrangements," he said. "These reforms will be submitted to a vote in parliament but if necessary I will have recourse to a vote by our fellow citizens in a referendum."

Macron said shrinking parliament -- one of his campaign proposals -- would have "positive effects on the general quality of parliamentary work".

The Senate has 348 members, while the lower house National Assembly has 577.