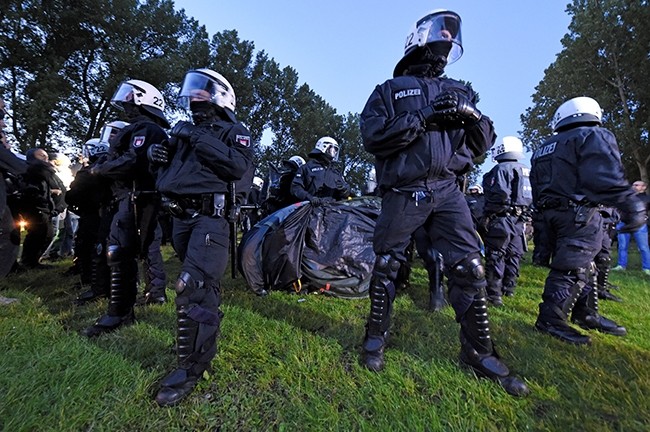 German police seized an extensive arsenal of weapons along with unknown chemicals at the homes and garages of two men suspected of plotting "significant crimes" against the upcoming G20 summit in Germany's northern city of Hamburg, police said Sunday.

A series of police searches revealed that a 30-year-old and a 26-year-old man had an "enormous" arsenal, which included knives, baseball bats, batons, legal as well as forbidden pyrotechnics, bottles and cans filled with presumably flammable liquid, gas masks and numerous containers with unknown powder or chemicals.

Police said they believe the weapons and the chemicals would be used to commit violent crimes during the G20 leaders' summit.

The 26-year-old has been released from custody, while the 30-year-old remains detained and faces charges of violating weapons and explosives laws. Local media reported that latter is part of the left-wing extremist scene.

The Group of 20 summit will take place on July 7-8. The G20, comprised of 19 countries plus the European Union, is expected to discuss several global political and economic issues during the summit.

Demonstrators, with widespread participation expeceted, have been preparing to protest the summit. Hamburg has increased its security measures, including tightening border controls, in preparation for the event.

According to German media sources, about 15,000 police officers from across Germany will be recruited for the summit in Hamburg.