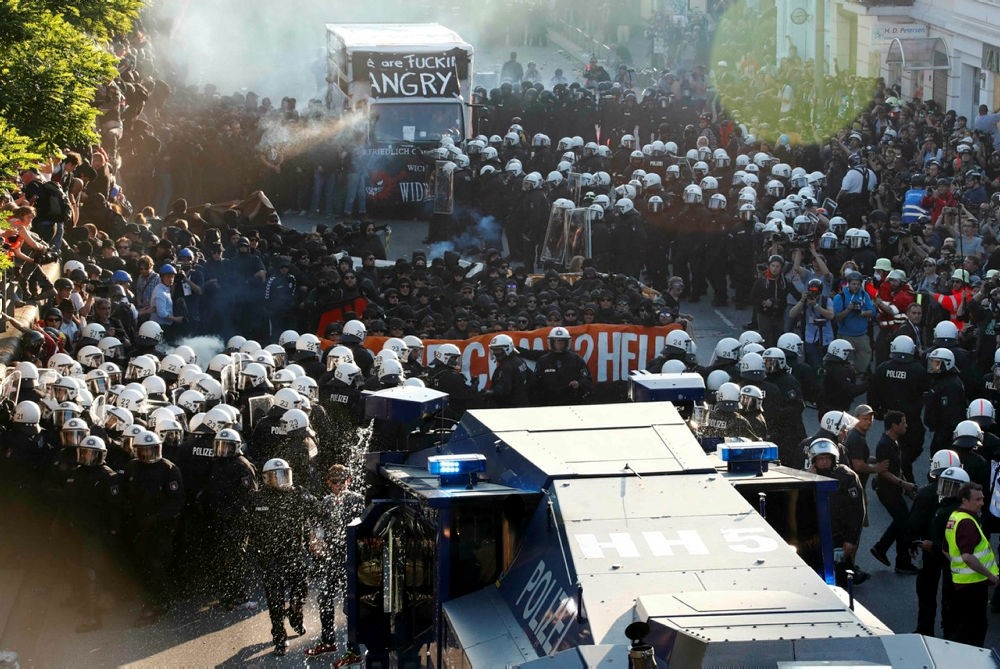 German riot police confront protesters during the demonstrations during the G20 summit in Hamburg, Germany, July 6, 2017. (REUTERS Photo)
by Compiled from Wire Services Jul 06, 2017 12:00 am

German police and protestors clashed Thursday at an anti-G20 march in Hamburg, with police using water cannon and tear gas to clear a hardcore of masked anti-capitalist demonstrators flinging bottles and stones.

Police say they repeatedly asked a group of anti-capitalist demonstrators to remove their masks Thursday evening, to no avail. They then decided to separate the group from the rest of the several thousand-strong demonstration.

With U.S. President Donald Trump having arrived in the afternoon, several people were injured as riot police in helmets charged to disperse the demonstration which took an ugly turn shortly after it began at 7:00 pm (1700 GMT).

Chanting "Get lost! A-A-Anticapitalists!", the 12,000-strong contingent bearing the banner "Smash G20!" and "Welcome to Hell" was halted as some 1,000 hard-left Black Bloc protesters refused to heed police orders to remove their black hooded tops and masks.

The protest march, which was due to head to and encircle the summit venue, was soon afterwards called off by organizers, Hamburg police said on Twitter.

Police helicopters were circling overhead the tense scene on a street running alongside the Elbe river harbor with its container cranes, and near mural-covered former squats that saw heavy clashes with police in the 1980s.

Protesters were seen scrambling to leave the scene, some changing out of their all-black gear, as police announced that the organisers have called off the march following the clashes.

Up to 100,000 demonstrators are expected before and during the two-day Group of 20 meeting gathering US President Donald Trump, Russia's Vladimir Putin and Xi Jinping of China.

A holding center for detainees has been set up with space for 400 people and detention judges are on hand.

Some 30 demonstrations have been announced before and during the meeting, organized by anti-globalization activists and environmentalists, trade unions, students and church groups.

"Welcome to Hell" organizer Andreas Blechschmidt said the motto is "a combative message... but it's also meant to symbolize that G20 policies worldwide are responsible for hellish conditions like hunger, war and the climate disaster".

Hamburg has banned rallies from the inner city and along access roads to the airport, forcing marchers into harborside areas of St Pauli and Altona, away from the G20.

Protesters accuse the authorities of turning Germany's second city into a "police fortress" and restricting their constitutional right to assemble and demonstrate.

The city says it won't be taking any chances as it must protect leaders, some 10,000 delegates and almost 5,000 media workers from both the threat of terrorist attacks and the street protests.

Mega-summits like the G20 have in recent years usually been held in remote locations, but Germany was forced by its logistical demands to host it in a large city with a big venue and dozens of hotels.

Hamburg is desperate to avoid a rerun of the kind of major urban clashes seen at the 2001 G8 summit in Genoa or the Frankfurt opening of the new European Central Bank building in 2015.