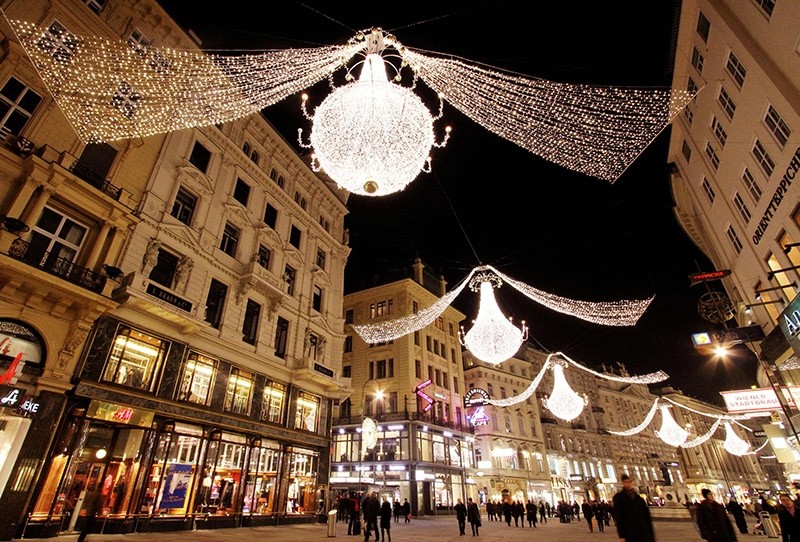 This file photo taken on November 27, 2009 shows Christmas decorations glowing in the old town of Vienna after Vienna officialy lit up the city for the upcoming Christmas (AFP Photo)
by Jul 06, 2017 12:00 am

The U.N. cultural body UNESCO labeled the center of Vienna as endangered cultural heritage Thursday because of a planned high-rise building, in a first step that could ultimately lead to the loss of the city's world heritage status.

The building at the edge of the center threatens to alter the character of the Austrian capital, the World Heritage Committee of the U.N. Educational, Scientific and Cultural Organization argued at a meeting in the Polish city of Krakow.

Although the planned height of the apartment and hotel complex has been lowered from 75 to 66 meters, "the proposed buildings would still have a substantive inappropriate negative visual impact," according to an UNESCO document that formed the basis for Thursday's decision.

UNESCO can put protected sites on a red list as a warning tool. As a measure of last resort, the U.N. body can take sites off its heritage list.

UNESCO has asked Vienna to take corrective measures, and the city plans to submit its arguments to the U.N. body by early February.

Vienna's deputy mayor and planning chief, Maria Vassilakou, was defiant Thursday, charging that UNESCO ignores the tensions that arise between the needs of modern society and the protection of its history.

"We must not forget that our cultural heritage is not only about what the city looks like but also about life within that city," she said in a statement.

There is a risk that the current investor might pull out of the high-rise project, which could endanger the future of the popular ice rink that would remain on the site under the current plan.

Vassilakou criticized the fact that it has been nearly impossible to engage UNESCO in a dialogue about the controversy.

"If things continue in this manner, I see big problems when it comes to integrating world heritage status in an urban context in the long run, not just for Vienna," Vassilakou warned.

Vienna's tourism board has argued that visitors would continue to flock to the city even if it lost its UNESCO heritage status.

Currently, 55 of the 1,052 protected world heritage sites are on UNESCO's List of World Heritage in Danger, including Aleppo, Damascus and Palmyra in war-ravaged Syria.

The German city of Dresden was put on that red list in 2006 and lost its heritage status in 2009 because of a controversial bridge project.