French police move out at least 2,500 migrants in northern Paris 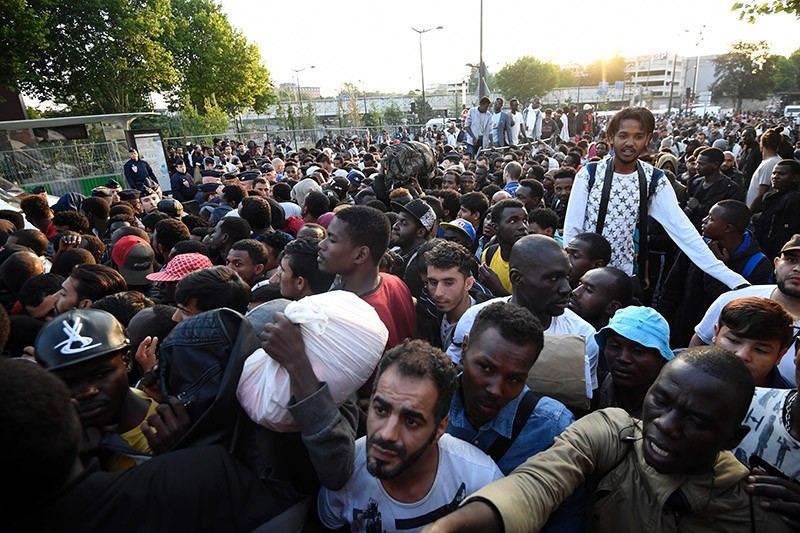 French anti-riot police CRS officers surround migrants and refugees during the evacuation of a makeshift camp at Porte de la Chapelle, northern in Paris, on July 7, 2017, one of several camps sprouting up around the French capital. (AFP Photo)
by Jul 07, 2017 12:00 am

Paris police on Friday moved out 2,500 migrants who had been living rough in the north of the city, officials said, in the latest operation to ease strains caused by a human influx to Europe.

The evacuation, which went ahead smoothly, entailed moving out migrants who had been living around an aid center set up in the Porte de la Chapelle area last November.

The authorities mobilized 60 buses to disperse them to a couple of other locations in the Paris region, mainly school gymnasiums that have become available during the holiday season.

Officials had been expecting to move out 1,600 migrants, but according to Francois Ravier, a senior official with the Paris region prefecture, "at least 2,500" people were involved.

"Experience shows that there are always more people than estimated," he said.

Paris became a gathering point for migrants after the closure last October of the notorious "Jungle" near Calais -- a makeshift camp near the Channel coast where thousands lived in the hope of climbing aboard trucks or trains to get into Britain.

Friday's evacuation was the 34th to take place in Paris in the last two years. The previous operation was on May 9, when more than 1,600 migrants were moved out from the same area.

Aid workers said around 200 more migrants had been coming into the area every week recently, raising security and hygiene concerns and causing tensions with locals.

Europe's migrant influx began in 2015, centering on Greece, where hundreds of thousands of people, many of them fleeing war and poverty in the Middle East and Afghanistan, crossed from Turkey.

The crisis receded in 2016 under an agreement with Turkey to clamp down on illegal border crossings.

However, it revived this year, focusing instead on sea crossings from Libya to Italy, mainly entailing people from sub-Saharan Africa.

On Thursday, EU interior ministers pledged to back a plan to help Italy, which has accepted around 85,000 people since the start of the year and says it is overwhelmed.