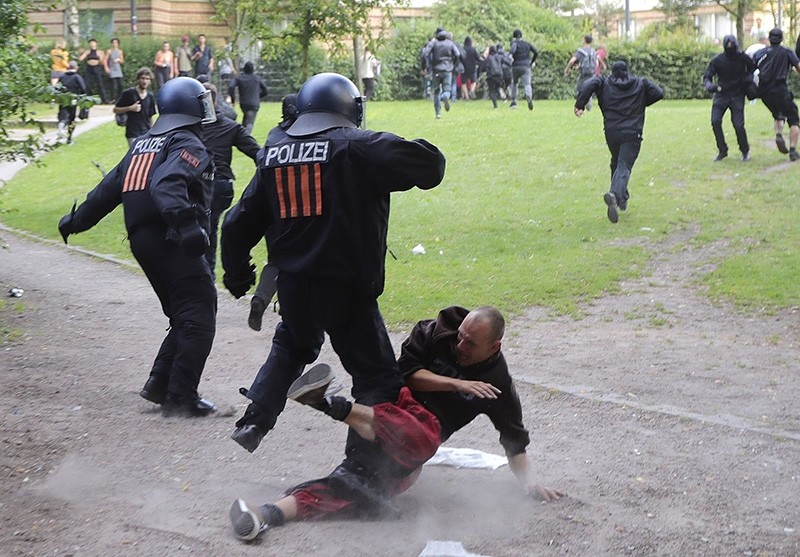 Riot police chase protesters during clashes at Schanzenviertel quarter close to the squatted culture center 'Rote Flora' on the sidelines of the G20 summit in Hamburg, Germany, July 07, 2017. (EPA Photo)
by Anadolu Agency Jul 08, 2017 12:00 am

The press accreditations of a number of journalist trying to report on the G20 summit were cancelled Friday "for security reasons", Germany's Federal Criminal Police Office said.

A photographer with the German daily Weser Kurier had his accreditation withdrawn "with no mentioned reason", according to a statement from the paper.

And Junge-Welt reported one of its journalists was also denied entry to the press center at the summit after his accreditation papers were taken from him by the federal office.

"The Federal Press Office decides on the withdrawal of the accreditation with security authorities", the agency said via Twitter.

Meanwhile, one of the top reporters of Germany's best selling newspaper Bild also criticized the stance of police against journalists.

"Police selectively attack journalists: 'No more press freedom from now on, get lost or go to the hospital!" Frank Schneider, Bild's chief field reporter in North Rhine-Westphalia, wrote on Twitter.

The action against the journalist occurs as the leaders of the world's 20 biggest economies meet in Hamburg amid violent clashes between police and demonstrators.

Several hundred protesters, who call themselves the Black Bloc, have since Thursday held "Welcome To Hell" protests in an attempt to disrupt the summit.

The Black Bloc blames police for escalating tensions and using what it says are disproportionate measures against demonstrators.