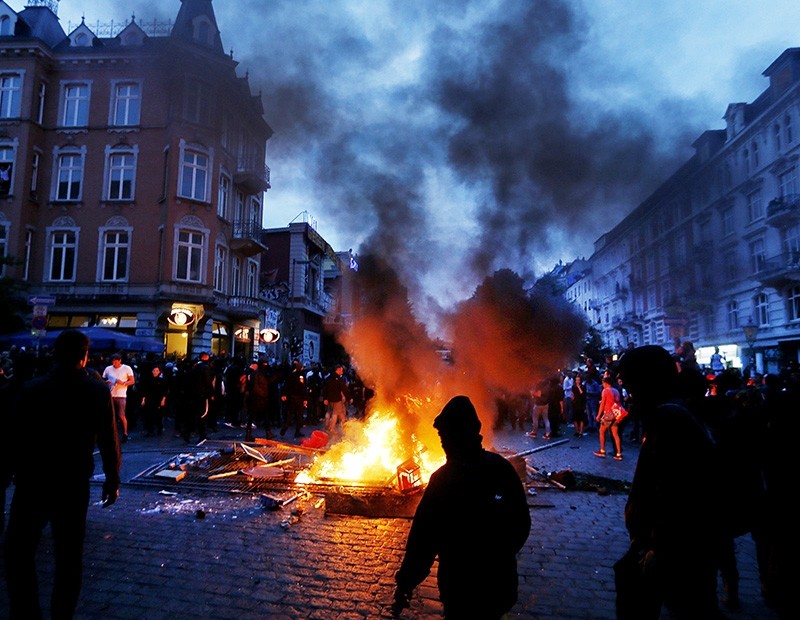 Raging street battles that marred Germany's G20 summit have sparked a political fight over how Hamburg could descend into "mob rule" and why Chancellor Angela Merkel chose a hotbed of leftist militancy as the venue.

Germany's top-selling Bild daily was withering in its condemnation of the chaos that saw far-left and anarchist radicals torch rows of cars, loot shops and hurl rocks and bottles from burning barricades at riot police.

"One should use with caution the words 'failure of the state'. Sadly, it applies in Hamburg," the newspaper thundered Saturday, slamming the summit as a "debacle."

"Of course the police did all it could. But the street belonged to the mob. The feeling of general security that the state must guarantee has ceased to exist in Hamburg over the last 48 hours."

The harsh criticism came as 20,000 police in the city where Merkel was born braced for a third day of protests against the meeting where she hosted U.S. President Donald Trump, Russia's Vladimir Putin and other world leaders.

"The terrible message of Hamburg is: When the mob wants to rule, it will," said Bild.

One police union blamed Merkel and Hamburg mayor Olaf Scholz for allowing the chaos, which left over 200 police and as yet unknown numbers of protesters injured, and for choosing the city in the first place.

"The politicians carry the sole responsibility for the many injured police officers and the destruction across the city," the union's Hamburg chairman Jan Reinecke told news weekly Der Spiegel.

Criticism also came from Merkel's conservative camp, with Bavarian CSU politician Hans-Peter Uhl charging that "the G20 summit should never have been held in a city of millions like Hamburg. Security is way too difficult to control there."

Merkel's government had long argued that it chose the northern port city, which dubs itself Germany's cosmopolitan "Gateway to the world", because it symbolized G20 core values from open trade to an internationalist outlook.

Rather than choose a remote rural location, as has been the norm in recent years, G20 leaders would show they are not a power elite that hides away from the people.

Some also saw the G20 summit, years in the planning, as a dress-rehearsal as Hamburg bid for the 2024 Olympics -- an effort the people of Hamburg later torpedoed in a referendum.

Finally, there was the question of logistics, officials explained: no countryside retreat, island or cruise ship is big enough to host a mega-event with over 10,000 delegates.

On Saturday, Merkel defended Hamburg's choice and condemned the violence that occurred during protests. She also praised "excellent work" by German security forces, saying that the government looks to help people affected by violence.

Signs of looming trouble appeared late last year as stickers and posters went up on walls that vowed to "Smash G20" and promised a "Welcome to Hell" -- the title of the first protest last Thursday that quickly deteriorated into street clashes.

They point to Hamburg's dual identity, both a wealthy and leafy port city and a decades-old hotbed of leftist activists home to famous former squats like the Hafenstrasse and Rote Flora.

Some 30 separate anti-G20 rallies have ranged from peaceful marches and street parties with thumping techno beats to non-violent road blockades and boat protests -- to the ugliest violence that flared after nightfall.

The protest coalition BlockG20, which holds G20 leaders responsible for ills from war and poverty to climate change, hailed it all "a victory", having delayed delegations and trapped U.S. First Lady Melania Trump in a lakeside residence for hours.

They also accused police of excessive violence, with spokesman Christian Blank saying "police beat us, attacked us with pepper spray and water cannon, but despite the violence of state power, we did not give up".

"The streets belong to the protesters, not the summit," declared the coalition's Jana Schneider.

Spiegel Online judged that Merkel, who faces elections on September 24, "must realize that it is mostly pictures of burning cars and black-clad radicals that will be remembered from the G20 summit".

"Many had warned against hosting such a huge event in a major city with a left-wing radical scene. Now the worst fears have come true -- and a dark shadow has been cast over the summit shortly before the national election."