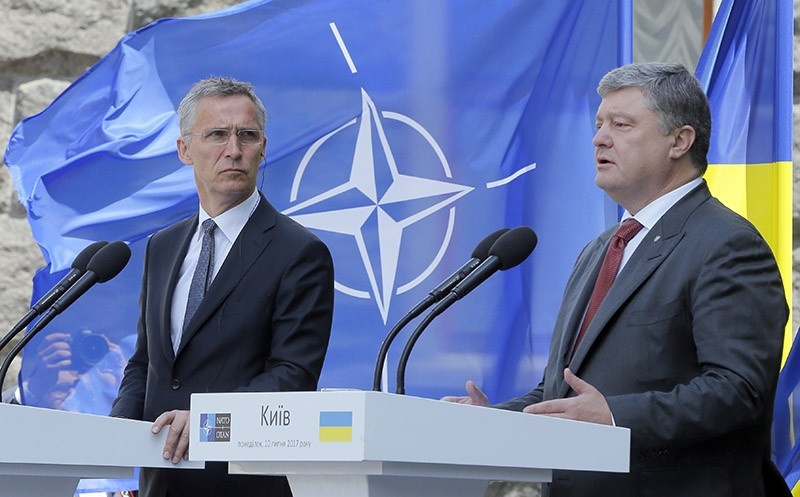 Ukraine and the North Atlantic Treaty Organization will begin discussions on a roadmap to get Ukraine into NATO, with Kiev pledging reforms to it up to standard by 2020, President Petro Poroshenko said Monday.

Speaking alongside Poroshenko on a visit to the Ukrainian capital, Secretary General Jens Stoltenberg said NATO has provided Ukraine with new equipment to uncover the perpetrators of a cyber-attack that hit Ukraine in June and spread globally.

"Ukraine has clearly defined its political future and future in the sphere of security," Poroshenko told reporters.

"Today we clearly stated that we would begin a discussion about a membership action plan and our proposals for such a discussion were accepted with pleasure."

At loggerheads with Russia and fighting a Kremlin-backed insurgency in eastern Ukraine, Ukraine passed a law in June prioritizing NATO membership as a foreign policy goal.

NATO leaders agreed at a summit in 2008 that Ukraine would one day become a member of the alliance and the country already contributes troops to NATO missions including in Afghanistan.

But there are even larger barriers.

NATO rules state that aspiring members must "settle their international disputes by peaceful means," meaning Ukraine would need to resolve the Donbass conflict -- an insurgency by pro-Russian forces -- that has so far killed more than 10,000 people.

The meeting between Poroshenko and Stoltenberg comes a day after U.S. Secretary of State Rex Tillerson visited Kiev and said Russia must make the first move in staunching the violence in eastern Ukraine.