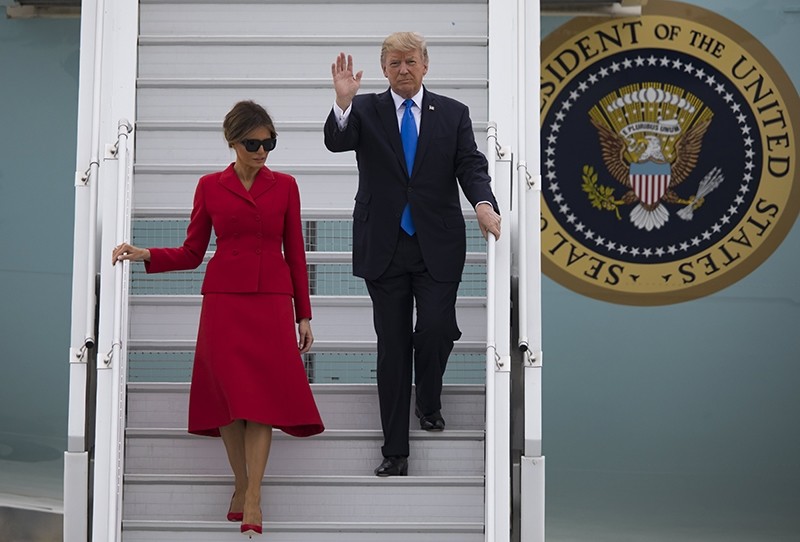 U.S. President Donald Trump arrived in Paris on Thursday for a high profile two-day visit during which he will be the guest of honor at the annual Bastille Day parade.

The president was then scheduled to meet U.S. military leaders, while Melania Trump visited a children's hospital in southern Paris and spoke to some of the young patients.

President Trump will later be received with military honors at the Hotel des Invalides in Paris.

There, French President Emmanuel Macron is expected to show him the tombs of French World War I commander Marshal Ferdinand Foch and Napoleon Bonaparte.

Despite his strong criticism of Trump's withdrawal from the Paris agreement on limiting climate change, Macron has repeatedly warned against isolating the U.S. president.

"We need the United States of America," he said in an interview published Thursday by newspaper Ouest-France. "And we have essential common ground: the fight against terrorism and the protection of our vital interests."

This year's centennial of the U.S. entry into World War I gave Macron a premise for inviting Trump to Paris for Bastille Day celebrations.

A contingent of U.S. troops will lead Friday's parade in honor of the occasion.

His son, Donald Trump Jr, disclosed several emails this week about his arrangements last year to meet a Russian lawyer who apparently claimed to have damaging information about rival presidential candidate Hillary Clinton.

Trump and Macron are expected to discuss terrorism and major security issues including the Syrian conflict and the situation in the Sahel region of Africa, where French troops are engaged in a mission to support local forces against terrorists.

Those are areas where the two leaders are keen to cooperate despite their differences on other issues, which included a very public disagreement on Trump's withdrawal from the Paris agreement.

Macron at the time invited U.S. scientists and "responsible citizens" disappointed by the decision to come to France.

While the two leaders discuss world affairs, Macron's wife Brigitte is due to accompany Melania Trump on a visit to Notre Dame cathedral and a boat tour on the Seine.