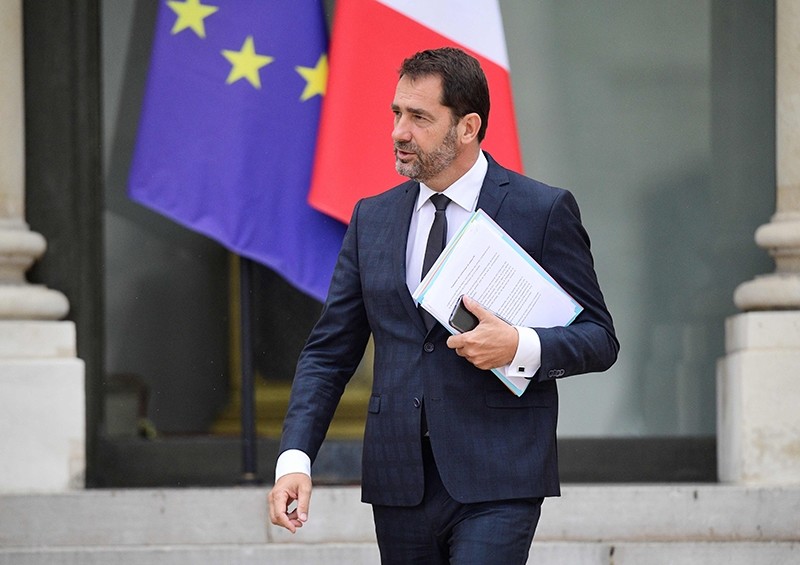 French Junior Minister for the Relations with Parliament and Government Spokesperson Christophe Castaner leaves the Elysee palace in Paris on July 19, 2017 (AFP Photo
by Associated Press Jul 19, 2017 12:00 am

A French woman captured in the Iraqi city of Mosul with her four children is facing possible prosecution in Iraq for allegedly collaborating with the Daesh terrorist group, in a test case for how governments handle the families of foreign fighters now that the terrorists are in retreat.

The fate of the children, ranging in age from 6 months to 8 years old, is in legal limbo. Their father's whereabouts are unknown.

The woman's lawyer says the family should be brought to France, even though she would probably be jailed and could face terrorism charges upon her return. Lawyer William Bourdon fears she could face abuse in Iraq and be used as a scapegoat for Daesh crimes or as a pawn in domestic political conflicts.

But French government spokesman Christophe Castaner said Wednesday the mother should be prosecuted in Iraq, saying she wasn't in battle-torn Mosul "for tourism."

While he said France condemns reported abuses by Iraqi troops in their campaign against Daesh, he insisted "the authorities in Iraq are justified in wanting to judge (foreign fighters) on site."

How Iraq and France choose to handle this family's case could set a precedent for the many other foreigners who joined the Daesh cause. France alone estimates that 750 French people are among extremists in Iraq and Syria — including up to 450 children.

While Bourdon could not provide details about why the French family joined Daesh, France has sent more terrorists to Iraq and Syria than any other Western country. France has also been repeatedly targeted by deadly Daesh attacks, mainly staged by homegrown terrorists.

The captured Frenchwoman abruptly left her home in a Paris suburb in late 2015 and followed her husband to Syria and then to Iraq, taking their three children along, according to Bourdon. The woman's family doesn't want her name released for their protection.

The woman gave birth to a baby girl six months ago in Mosul, Bourdon said, even as Iraqi troops — with help from U.S., French and other forces — battled to oust Daesh from its main stronghold in Iraq.

The woman and children were captured July 8 in Mosul's old city, then transferred to Baghdad last week, according to Bourdon.

"The logical solution, from a judicial and human standpoint, would be for the family to be handed over to French authorities," Bourdon told The Associated Press. "That she made the most stupid choice of her life is not a reason to have a view of her that is only judicial."

The government spokesman said French and Iraqi authorities are working to verify the children's identities, but would not detail where they are or might be taken next.

The French Foreign Ministry said Wednesday it had told the woman's family last month to urge her to turn herself in to French consular authorities in Baghdad or Irbil.

Iraqi officials also said they arrested a German woman last week in Mosul's Old City, the first time they reported arresting a foreign Daesh-linked woman. They said she had been recruited by an Arab Daesh member through social media.