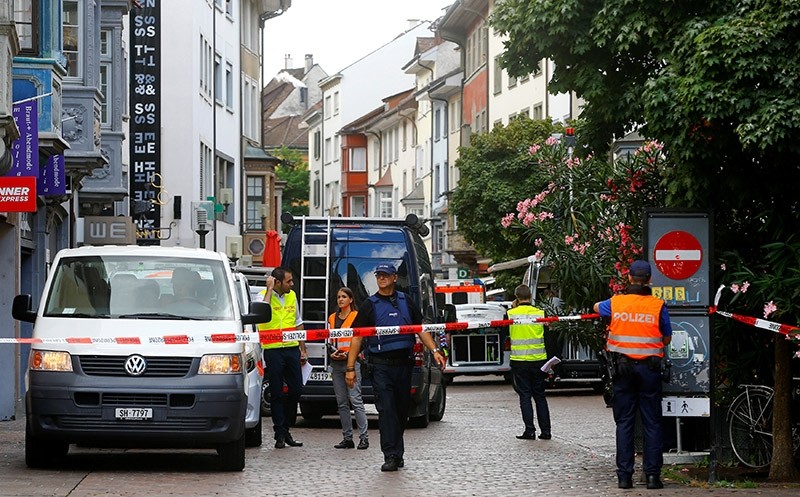 Swiss police officers stand at a crime scene of an alleged chainsaw attack in Schaffhausen, Switzerland July 24, 2017. (Reuters Photo)
by Daily Sabah with Agencies Jul 24, 2017 12:00 am

Five people sustained injuries in an attack by a man in the Swiss town of Schaffhausen on Monday, and two of the victims were severely injured, a police spokeswoman said.

Police spokeswoman Cindy Beer told SRF television that police were alerted at 10.39 a.m. local time to the incident. She said "we can't say exactly what happened at this point."

She added: "We just know that a person wounded several people."

The man's whereabouts are currently unknown. Beer said police can't say with certainty what implement the man used to wound the others.

The tabloid newspaper Blick reported online that an witness saw a man with a chainsaw. Witnesses, including a local shop manager, told Blick the attacker was wielding a chainsaw and that businesses and pedestrians had been evacuated.

The attacker, who remains at large, was identified by the police, and was confirmed to carry out the attack with a chainsaw.

They say they have now identified the suspect, adding that he is about 1 meter 90 centimeters (6.2 feet) tall, bald and with an unkempt appearance. He's believed to be driving a Volkswagen vehicle with Swiss plates.

The police also ruled out the possibility of the attack being a terrorist act.

The attack happened inside an office building on a shopping street in the centre of Schaffhausen, a medieval town of 36,000 inhabitants on the German border, police said.

The town center was cordoned off in the morning after police were alerted.

Dozens of police and ambulance vehicles, as well as ambulance helicopters, were deployed in the town, which is close to the German border.