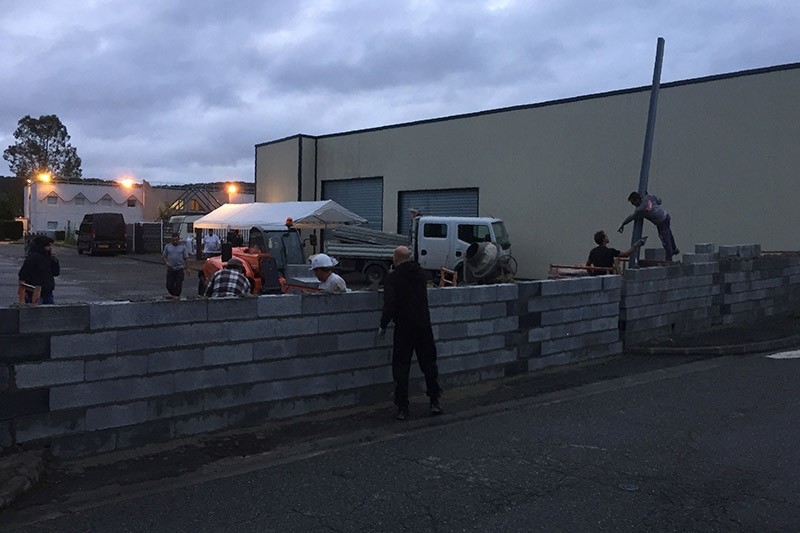 A handout photo released by the French association 'Collectif Semeac' shows local residents building a wall at the entrance of a Formula 1 hotel in Semeac, south western France, early on July 24, 2017. (AFP Photo)
by Jul 25, 2017 12:00 am

Protesters in a town in southwest France have built a nearly-two-meter-high wall around the entrance to a disused hotel to try to prevent it being turned into a migrant shelter.

Working under cover of darkness, a few dozen residents of Semeac in the Pyrenees mountains erected a wall 18 meters (60 feet) long and 1.8 meters high barring access to the Formule 1 hotel, a spokesman for the group confirmed.

"We not against taking in migrants," Laurent Teixeira told AFP. "But you have to take account of the citizens."

Teixeira accused the authorities of failing to consult residents about the project to turn the former budget hotel into a shelter for up to 85 migrants.

"Nothing is planned for the migrants' daily life," he said, arguing that schools and other public services in the town of 5,000 people would be unable to cope with the newcomers.

Protester Hugo Lacoue, a tobacconist, said he was opposed to migrants being hosted in a suburban neighborhood.

The hotel in Semeac is one of 62 budget hostelries bought by the state in order to house some of the asylum-seekers currently sleeping rough on the streets of Paris or the northern port of Calais.

With the pace of migrant arrivals expected to accelerate this summer, the government has come under pressure to create more shelters.

More than 2,800 people were evacuated earlier this month from a makeshift camp that sprung up around a packed migrant center in northern Paris, but a new camp is already forming in the area.

Last year, several French towns saw protests over the establishment of migrant shelters but in most places the protests died down after the migrants moved in.