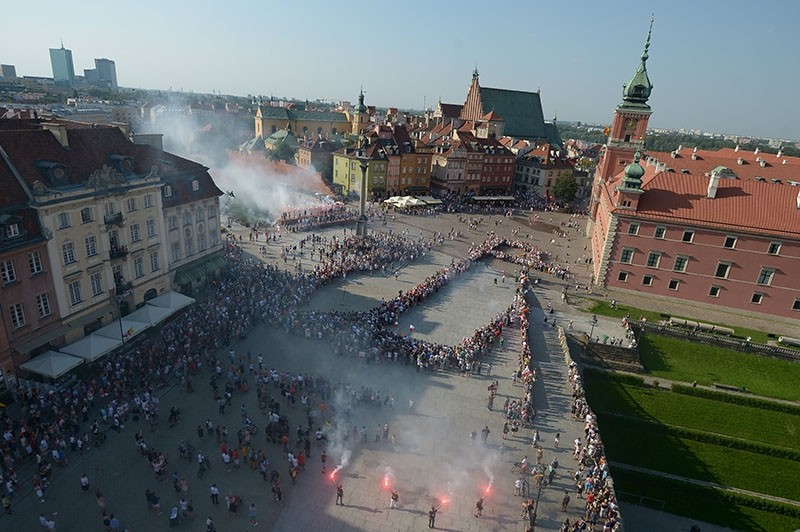 Warsaw residents create a symbol of The Kotwica - a World War II emblem of the Armia Krajowa (Home Army, or AK) - during a ceremony commemorating the 73rd anniversary of the Warsaw Uprising, in the Old Town, Warsaw, Poland, Aug. 01 2017. (EPA Photo)
by Associated Press Aug 02, 2017 12:00 am

A lawmaker says Poland is looking into demanding reparations from Germany for the massive losses inflicted on Poland during World War II.

Arakadiusz Mularczyk, a lawmaker with the ruling Law and Justice party, said Wednesday the Polish parliament's research office is preparing an analysis of whether to make the claim and will have it ready by August 11.

Defense Minister Antoni Macierewicz said a day earlier that Germans should now "try and pay back the terrible debt they owe to the Polish people."

World War II, which began with the German invasion of Poland in 1939, killed nearly 6 million Polish citizens and wrought huge material loss on the country, including the near destruction of Warsaw.

Mularczyk's statement came a day after August 1 as the country marked the 73rd anniversary of the Warsaw Uprising, a doomed revolt against the occupying Nazi Germany.

Sirens sounded in Warsaw for about two minutes starting at 5 p.m., the hour the 1944 uprising began, bringing traffic mostly to a standstill while people stopped to pay respect to the Poles who fought and died.

President Andrzej Duda, veterans, scouts and others took part in ceremonies, as did several thousand far-right extremists who marched through Warsaw.

The German Embassy in Warsaw flew its flags — a German and a European Union flag — at half-staff to honor the victims.

The Warsaw Uprising broke out August 1, 1944, with the Polish underground taking up arms against the powerful Nazi forces, hoping to liberate the city before the arrival of the Soviet Red Army. They held out for 63 days before the Germans crushed the revolt.

It was the largest act of resistance in any nation under German occupation during the war. The heroism of insurgents who fought for national liberation remains a defining element in Polish national identity.

The Germans suppressed the rebellion brutally, destroying most of Warsaw and killing around 200,000 people, most of them civilians.

Soviet troops who had arrived on the outskirts of Warsaw in their westward push against Adolf Hitler's forces remained on the city's outskirts without helping the Poles who were supposed to be their allies. The Red Army's inaction was viewed as a deep betrayal.

U.S. President Donald Trump paid homage to the "desperate struggle to overthrow oppression" during a July 6 visit to Warsaw.

Trump recalled that the Soviets "watched as the Nazis ruthlessly destroyed the city, viciously murdering men, women and children."

The 1944 uprising by the Polish resistance came more than a year after Jews confined to the Warsaw Ghetto and about to be sent to death camps took up arms against the Nazis. That revolt also ended in tragedy for the Jews.