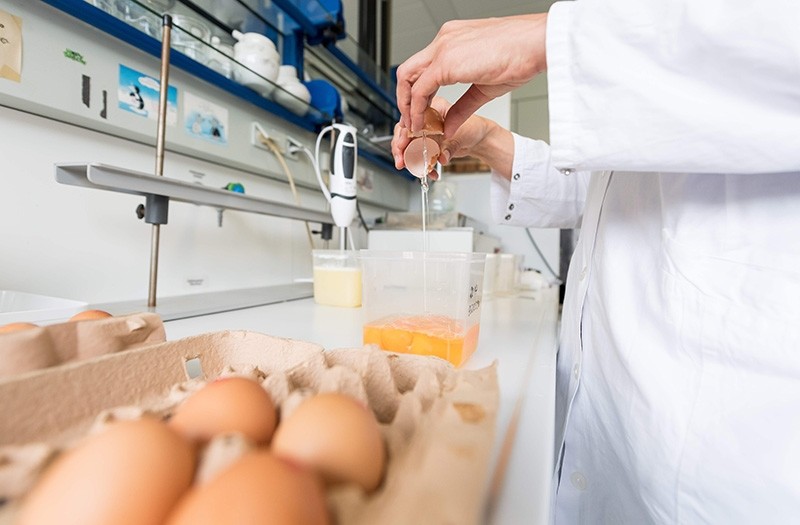 Picture taken on August 4, 2017 shows an employee of the chemical veterinary examination office working on eggs at the institute in Muenster, northwestern Germany, in order to analyse them on toxic residues. (AFP Photo)
by Aug 05, 2017 12:00 am

Belgian officials admitted Saturday they knew in early June there was a potential problem over insecticide-contaminated eggs but kept it secret because of an ongoing fraud investigation.

"We knew since early June there was potentially a problem with fipronil in the poultry sector," Katrien Stragier, a spokeswoman for Belgium's food safety agency (AFSCA), told Flemish television VRT.

"We immediately launched an investigation and we also informed the prosecutor because it was a matter of possible fraud," she added.

"From that point on the secrecy of the inquiry took precedent. We understand that people have questions about public health and we are trying to answer them," she added.

Contacted by AFP over the past few days, the prosecutor in Antwerp handling the case refused to give out any information on the specific orders of the investigating judge.

Belgian supermarkets have cleared eggs from the shelves of supermarkets as a precautionary while awaiting the results of tests.

In Germany and the Netherlands several million eggs from Dutch farms have already been recalled.

German Agriculture Minister Christian Schmidt pressed the authorities, particularly in Belgium and The Netherlands, to clear up the situation.

"Someone has clearly proceeded with criminal intent to contaminate (the eggs) with a banned product," Schmidt told the daily Bild.

Dutch officials closed down 180 businesses earlier in the week and after tests, the Dutch food authority (NVWA) said 138 poultry farms -- about a fifth of those in the country -- would remain closed.

One batch of eggs posing in particular posed "an acute danger to public health", the agency said.

Eggs from another 59 farms contained high enough levels of the insecticide, fipronil, for the food authority to warn against any children eating them.

Fipronil is commonly used in veterinary products to get rid of fleas, lice and ticks. It is banned from being used to treat animals destined for human consumption, such as chickens.