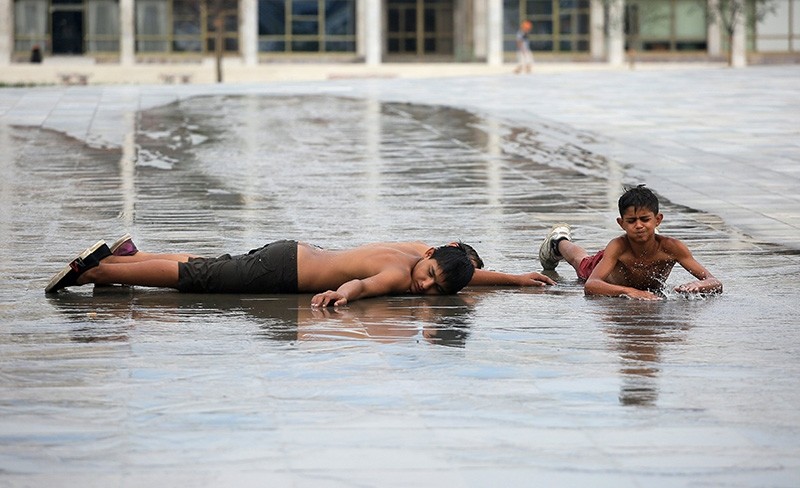 Albanian children rest after playing in a fountain during a heat wave, on the main square in Tirana, Albania, 03 August 2017. Temperatures are expected to reach over 40 degrees Celsius during the day, according to weather reports. (EPA Photo)
by Compiled from Wire Services Aug 05, 2017 12:00 am

Swaths of southern Europe sweltered Saturday in a heatwave that has claimed several lives, cost billions in crop damage and is, scientists warned, a foretaste of worse to follow in coming decades.

At least five deaths in Italy and Romania have been attributed to the extreme conditions since the heatwave set in around the start of August.

Unusually high, sometimes unprecedented temperatures are being recorded across an area spanning much of the Iberian Peninsula (Spain and Portugal), southern France, Italy, the Balkans and Hungary.

Thermometer mercury has regularly risen above 40 degrees Celsius (104 degrees Fahrenheit) across the affected areas, exacerbating the impact of an extended drought and the lingering impact of a July heatwave which sparked wildfires that claimed 60 lives in Portugal.

Hospital admissions have spiked 15-20 percent in Italy, where at least three people have died.

Italians longing for the beach have dubbed the hot spell "Lucifero", or Lucifer, after the biblical archangel said to have been condemned forever to the flames of hell.

The latest victim was a woman whose car was swept away overnight by an avalanche of water and mud as humid conditions near the Alpine ski resort of Cortina d'Ampezzo broke into torrential rain.

That tragedy follows the deaths on Thursday of two pensioners, a 79-year-old woman and an 82-year-old man, who were caught up in wildfires in, respectively, the central region of Abruzzo and near Matera in the south of the country.

In Romania, two deaths were linked to the weather, including a farmworker who collapsed after working in fields in the heat at Mogosesti in the northeast of the country. Police banned heavy traffic on major roads in daylight hours during the weekend because of the heat wave, while trains slowed down.

In Italy, humidity and other factors are making it feel much hotter with the so-called "perceived" temperature in Campania, the region around Naples, estimated at a broiling 55 Celsius (131 Farenheit) on Friday.

Hospital admissions are running 15-20 percent above seasonal norms and food producers are forecast to suffer billions of euros in losses as a result of reduced crop yields.

Italian wine and olive production is tipped to fall 15 and 30 percent respectively this year.

In Rome, tourists have been risking recently-introduced fines for splashing in the Eternal City's fountains to cool off.

But there has yet to be any sign of visitors to southern Europe's summer hotspots being deterred by the rising trend in temperatures.

Tourists were queueing once more Saturday outside Florence's Uffizi museum, which was forced to close Friday after its air conditioning broke down because of a lack of water from the dried up River Arno.

In Turkey, authorities have spent last week issuing warnings for the heat wave that increased the temperatures at least by five to ten degrees above seasonal averages. A flash flood alert has also been issued for various parts of the country.

In Istanbul, meteorologists have warned of unusually high temperatures and suffocating humidity, with a forecast of 35 degrees Celsius for the city all of next week, saying people should avoid exposure to direct sunlight that could lead to sunstroke.

The General Directorate of Meteorology said temperatures, already above seasonal norms, will soar in the first 10 days of August to 35 degrees Celsius, although for those out and about it could feel as high as 40 degrees Celsius in the afternoons.

Health authorities in France have warned citizens to be particularly aware of the risks faced by the sick and the elderly.

The country is still haunted by memories of a 2003 heatwave which resulted in an estimated 15,000 avoidable deaths among pensioners, some of whom had been left on their own by holiday-making relatives.

Spain's national weather service on Saturday issued an emergency warning for high temperatures for 31 of the country's 50 provinces as forecasts predicted temperatures of up to 44 C (111.2 F).

Although this part of Europe is used to scorching summers, meteorologists have warned that such high temperatures lasting over several days aren't that common. Serbian authorities have said the hot spell came from Africa.

"It is just too much," said 52-year-old real estate agent Sasa Jovanovic, from Belgrade, the Serbian capital. "Sometimes it feels as if I cannot breathe."

In the Alpine nation of Slovenia, authorities reported earlier this week the first-ever "tropical night" at 1,500 meters (4,920 feet) in the mountains, meaning temperatures were higher than 20 C (68 F) during the night.

Authorities in other countries urged people to stay indoors and drink a lot of water. The public health institute in Belgrade issued heat instructions, telling people to keep wet towels on windows if there is no air conditioning, and avoid physical strain and alcohol.

A train service in southern Serbia also was delayed earlier this week after tracks buckled in the heat.

In Croatia, authorities have appealed to the thousands of tourists vacationing along the country's Adriatic coast to be careful on the beaches and while traveling.

The streets of Montenegro's capital, Podgorica, and other towns, were empty on the weekend, sending people flocking to the country's Adriatic coast. Authorities there issued a fire alert because of dry weather.

Some 15 wildfires have been reported in Albania, and dozens of others throughout the region. Hot and dry weather has scorched crops amid fears of water shortages in Italy and Serbia as authorities appealed for care in consumption.

In neighboring Hungary, the state railway company said it would distribute water at busy terminals. At the Budapest Zoo, Beliy and Seriy, a pair of 2-year-old polar bear cubs, were given huge chunks of ice and freezing-cold watermelons to help them withstand the weather conditions.

Scientists meanwhile warned that deaths due to extreme weather in Europe could increase fifty-fold from an estimated 3,000 per year recently to 152,000 by the end of this century - if global warming is not reined in.

Southern Europe will suffer most and heatwaves would account for 99 percent of the deaths, according to research conducted for the European Commission and published in The Lancet Planetary Health.

The conclusions were questioned by Korean peers of the researchers who suggested humans would become less vulnerable to extreme weather with experience of it.

"We have always had them but their length and intensity has notched up since the 1950s and 60s and they are increasingly coming earlier or later.

"If you look at records for France, the vast majority of new records being set are for high temperatures. Record cold is becoming increasingly rare."

Scientist warned last week that large parts of South Asia, home to a fifth of the world's population, could become unbearably hot by the end of this century.