EU states begin process of sending migrants back to Greece 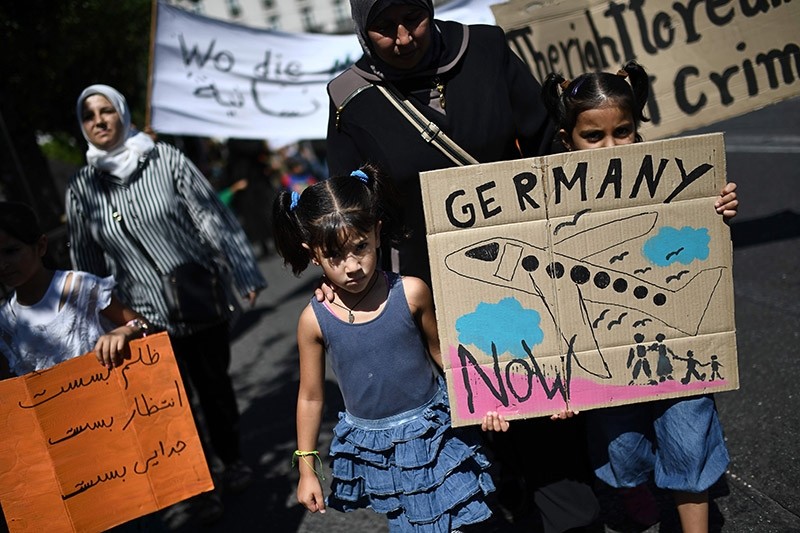 Two children hold a placard picturing a plane as they take part in a demonstration in central Athens outside the German embassy to protest against the limitation of reunification of families in Germany, on August 2, 2017. (AFP Photo)
by Associated Press Aug 08, 2017 12:00 am

European Union countries have begun the process of sending migrants who arrived in Europe via Greece over the last five months back to have their asylum applications assessed there.

EU rules oblige migrants to apply for asylum in the country they first enter. But the rules were suspended as hundreds of thousands of people, many of them Syrian refugees, entered Greece in 2015.

"Some member states have made requests but transfers have not begun. Greece has to give assurances that they have adequate reception conditions," European Commission spokeswoman Tove Ernst said Tuesday.

"Reception conditions in Greece have significantly improved since last year, which is why the Commission recommended a gradual resumption of transfers," she said. The recommendation is not binding on EU countries.

"We will accept a few dozen people in coming months," Ioannis Mouzalas told private Skai TV Tuesday. "This will be done provided we have the proper conditions to receive them."

Mouzalas said it was a "symbolic move" dictated by Greece's EU obligations.

He added that so far Greece's EU partners have taken in more than 30,000 refugees and migrants, under relocation and family reunion programs.

Greece's asylum service said the refugees and migrants returned to Greece under the Dublin agreement will be housed in rented accommodation or camps on the mainland and will have the option of applying for asylum in Greece.

All those who being accepted had been fingerprinted in Greece, their first point of entry to the 28-nation EU.