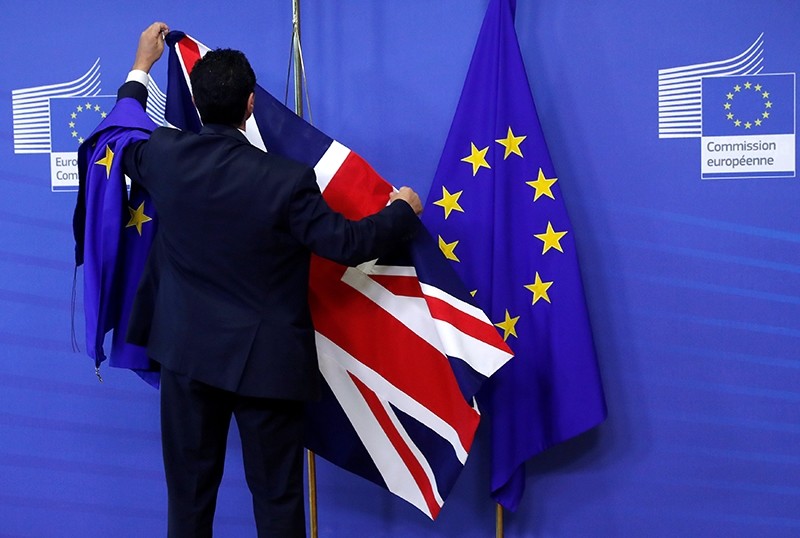 Flags are arranged at the EU Commission headquarters ahead of a first full round of talks on Brexit, Britain's divorce terms from the European Union, in Brussels, July 17, 2017. (REUTERS Photo)
by Aug 09, 2017 12:00 am

Britain's exit from the European Union will be the country's biggest calamity since World War Two, the former chief of staff to Brexit minister David Davis said on Wednesday, calling for a new political movement to oppose the divorce.

The criticism from someone who, until May, had a ringside seat for Britain's exit preparations comes at a time when Prime Minister Theresa May's Brexit strategy is the subject of open political debate after an ill-judged snap election in June badly weakened her position.

"It's the biggest calamity for our country since WW2, I'm afraid," said James Chapman, who ran chief negotiator Davis's office for nearly a year after the June 2016 EU referendum. He has since moved to work for a public relations firm.

Late on Tuesday he tweeted: "Past time for sensible MPs (Members of Parliament) in all parties to admit Brexit is a catastrophe, come together in new party if need be, and reverse it."

Chapman previously worked as an aide to then-finance minister George Osborne and worked on his campaign for 'Remain' in the run up to the referendum.

Before working for Osborne, he was political editor for the Daily Mail, an influential right-leaning newspaper which supported Brexit.