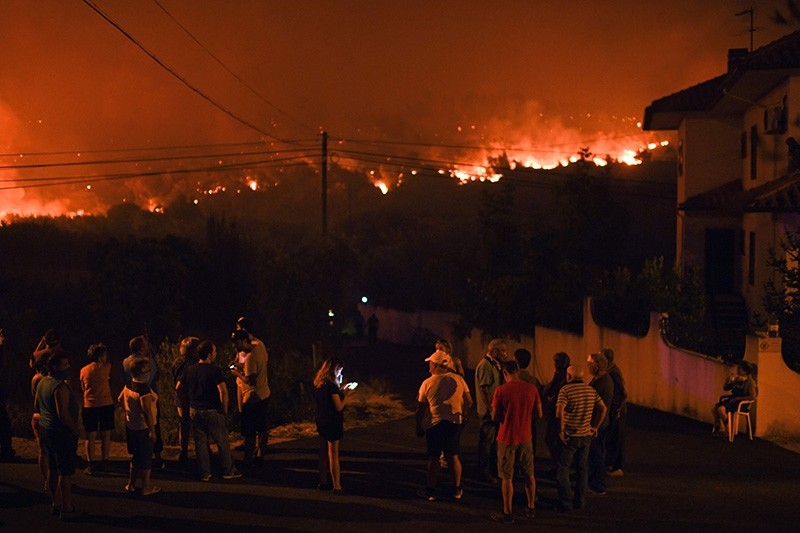 Villagers of Rio de Moinhos in Abrantes stand on the streets watching following a new rash of forest fires ahead of a weekend of warm temperatures, at Rio de Moinhos village in Abrantes on August 11, 2017. (AFP Photo)
by Compiled from Wire Services Aug 12, 2017 12:00 am

Portugal is fighting to put out a spate of wildfires after the southern European country hit a year high of outbreaks for a single day on Friday, authorities say.

Portugal's Civil Protection Agency, which coordinates its firefighting efforts, said Saturday that it recorded a record for this year of 220 separate wildfires on Friday.

Over 2,500 firefighters supported by over 800 vehicles and 15 air units were still mobilized on Saturday morning to combat the flames.

In the village of Bracal, flames were being blown towards houses as residents grabbed what they could to aid firefighters, an AFP journalist said.

Some residents voiced anger at authorities after a season of repeated wildfires which have stretched resources.

"Firefighters can't perform miracles, they are exhausted," said Lucia Ricardo, who lives in Bracal, close to the central town of Abrantes.

Six villages had been evacuated around Abrantes on Thursday as fire-dousing planes flew sorties over the flames.

Another blaze near Grandola, in the southern Setubal district, needed 200 firefighters to bring it under control after burning through around 3,000 hectares (30 square kilometres) of forest.

Portugal has been hard hit by wildfires, including one that killed 64 people and injured 200 others in June, during a summer marked by high temperatures and a lack of rain.

After an uncommonly dry winter and spring, almost 79 percent of the Portuguese mainland was enduring extreme or severe drought at the end of July, according to the national weather office.

Wildfires in Portugal this year have accounted for more than one-third of the burnt forest in the entire 28-country European Union.

Dry conditions have also fuelled fires on France's Mediterranean coast and on the island of Corsica in recent weeks.

Almost 700 people, mostly holidaymakers, were evacuated from two areas in Corsica Friday night because of fires fanned by strong winds.