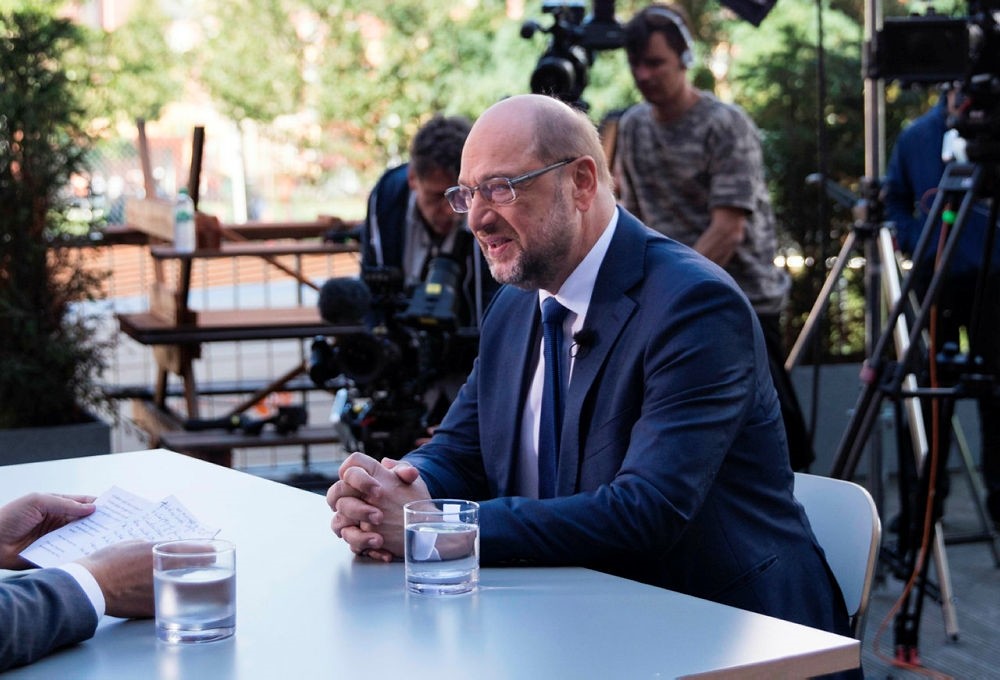 Schulz, leader of the left-leaning Social Democratic Party (SPD), said he would not take issue with Merkel's approach to handling the dispute between the United States and North Korea as Germany should stand united.

But he could not resist a dig at Trump, whom he described to the broadcaster ZDF as "this irresponsible man in the White House".

"What worries me is that an American president ... is sinking to the level of a North Korean dictator," Schulz added in a separate interview with the RTL channel.

On Friday, Merkel said there was no military solution to the North Korea issue, adding that "an escalation of the rhetoric is the wrong answer".

Six weeks out from the election, an Emnid opinion poll for Sunday's Bild am Sonntag newspaper put support for Schulz's SPD at 24 percent, far behind Merkel's conservative bloc, on 38 percent.

The two parties now rule in a "grand coalition", led by Merkel's conservatives. Despite the conservatives' big lead in surveys, a fractured political landscape could make it hard to form other viable coalitions.

Schulz insisted he could still win the election, telling ZDF: "I reckon I've got a good chance." Asked about the possibility of another grand coalition, he replied: "I have nothing against a grand coalition under my leadership."

The Emnid poll put support for the far-left Left party at 10 percent, with the pro-business Free Democrats (FDP) and the anti-immigration Alternative for Germany (AfD) both on 8 percent, and the environmentalist Greens on 7.

CAR MAKERS IN THE SPOTLIGHT

A day after Merkel rounded on Germany's auto executives for squandering trust in the sector, Schulz accused them of putting the industry at risk by failing to plan for the future.

The fate of the auto sector, Germany's biggest exporter and provider of some 800,000 jobs, has become a hot election issue as politicians accuse executives and each other of failing to find an adequate response to a scandal over emissions.

The scandal blew up almost two years ago when Volkswagen admitted to cheating U.S. emissions tests, throwing the spotlight on a major source of pollution and increasing the pressure for a decisive switch to alternative fuels.

"The problem is, we are living through a situation in Germany in which managers worth millions at VW, at Daimler, have fallen asleep and forgotten the future," Schulz told ZDF.

VW, along with fellow German car makers BMW, Daimler, Audi and Porsche, are also being investigated by European regulators for alleged anti-competitive collusion.

Trade unionists at VW have urged politicians not to exploit its problems for political gain.

Former chancellor Gerhard Schroeder, himself a former member of VW's supervisory board, accused Merkel of neglecting her duties by going on holiday rather than chairing the emissions talks with industry bosses.

"I don't want to spoil anyone's holiday. But here I would have taken charge personally. It is all far too important," Schroeder, a Social Democrat whom Merkel defeated in 2005, told the Swiss tabloid newspaper Blick.