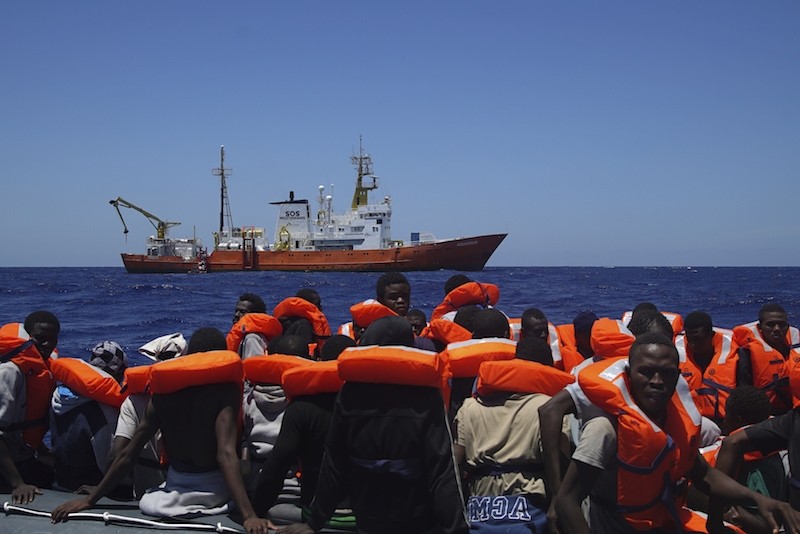 For the second time in two days, a humanitarian group has reluctantly decided to suspend migrant rescues in the Mediterranean Sea Sunday, citing Libyan threats. Other charities with rescue ships were considering doing the same.

Germany-based Sea-Eye said it made the decision to halt its water rescues "with a heavy heart," but for the sake of its crew's safety.

Sea-Eye cited the "changed security situation in the Western Mediterranean" following the Tripoli-based government's announcement it was extending its territorial waters.

Save the Children said its rescue ship was staying in Malta after Libya declared that its search-and-rescue area now will extend far beyond the 12 nautical miles Italy and other countries consider the limit of its territorial waters.

Libya also proclaimed its intention to "extend its control and prohibition of NGO ships in international waters," according to Save the Children, which is evaluating whether to stop its ship's patrols.

On Saturday, Doctors Without Borders also cited Libyan threats in suspending its sea rescue activities. A Spanish aid group's rescue ship reported that the Libyan coast guard last week fired warning shots at them while the vessel was in international waters.

Humanitarian groups worry that if migrants are blocked at sea after setting out from Libyan shores in smugglers' unseaworthy boats, they risk drowning without rescue ships nearby. They also fear that migrants will be mistreated in Libyan detention centers if they are thwarted from leaving the North African country.

The Italian Parliament recently approved the center-left government's request to send a naval mission to Libya to help the Libyan coast guard patrol its coast for migrant smugglers.

In an interview published Sunday in La Stampa daily newspaper, Italian Foreign Minister Angelino Alfano was quoted as saying, "We must avoid deaths at sea by reducing the departures" from Libya.

"We made two choices: that of taking away criminal earnings from traffickers — because fewer persons departing mean the traffickers earn less — and that of financing the U.N. agencies" working with refugees and migrants to "assure respect for human rights in the Libyan camps."

Some rescued migrants have told Italian judicial authorities that while waiting months for a chance to get on the smugglers' boats, they suffered from scarce rations, forced labor, rape, beating and torture.

Save the Children said it was seeking guarantees it could safely carry out effective rescue operations, and expressed worry for "the possibility that migrants are brought back to Libya, that's not considered a safe place where fundamental human rights are respected."

After hundreds of thousands of migrants rescued from foundering boats were brought to Italian ports in the last few years, Italians have become worried about the costs of caring for asylum-seekers in a country where unemployment is high and the economy is flat.

With elections due next year, Italian politicians of most stripes are advocating strategies to choke off the flow of migrants attempting to cross the Mediterranean Sea.