At least 13 dead, 50 injured after tree falls during religious event on Portuguese island 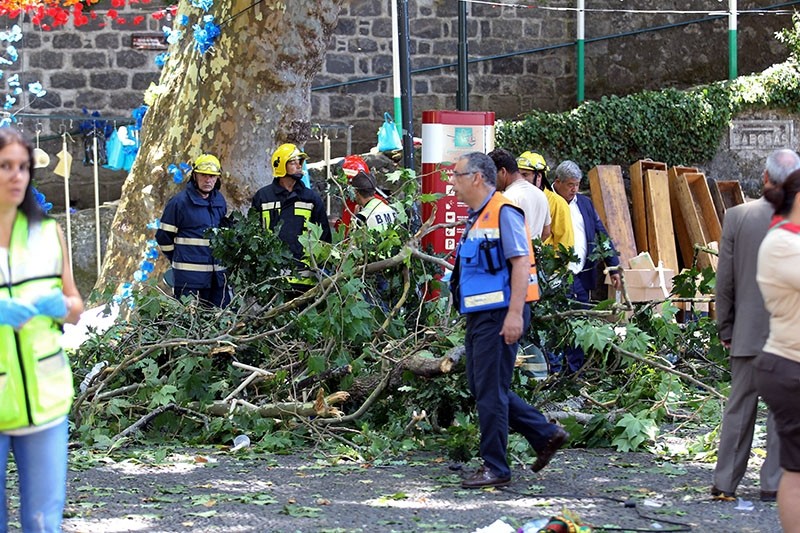 Firemen and emergency workers secure the site where a large tree fell and injured several people in Largo da Fonte, in the parish of Monte (EPA Photo)
by Compiled from Wire Services Aug 15, 2017 12:00 am

Thirteen people died and at least 50 were injured when an old growth oak tree collapsed on top of revelers during a religious festival on the Portuguese island of Madeira, local officials said Tuesday.

The public RTP television channel said at least 35 people were injured when the tree toppled into a crowd outside a church on the island's southern coast at the traditional Festa da Senhora do Monte event.

RTP public television has shown images of emergency workers gathered under a group of tall trees near Fonchal on the Atlantic island.

The tree had been classified as posing a danger for several years, Publico daily reported. But Mayor Paulo Cafofo disputed the report, arguing that the tree was healthy and green, which was why no one had seen a need to secure it with cables.

Authorities said the entire tree, including its root network, toppled onto members of the crowd gathered at a stand selling candles.

The fall came without warning. A video shared online showed the moment of impact, followed by panicked festival goers fleeing in all directions.

The injured included citizens of France, Germany and Hungary. The festival regularly draws in tourists from abroad. Seven of the wounded were in critical condition, reported the newspaper Publico, citing regional Health Secretary Pedro Ramos.

Of the dead, 10 died immediately, while three others died in hospital.

Miguel Albuquerque, president of the regional government, said there would be an investigation.

"But, at the moment, our priority is to provide support for the families of the victims and the wounded."

"In this time of pain, it is important to show solidarity and to provide aid to those who are suffering," he said.

The festival was immediately broken off as emergency crews swarmed the area. Maderia's government called for three days of mourning.