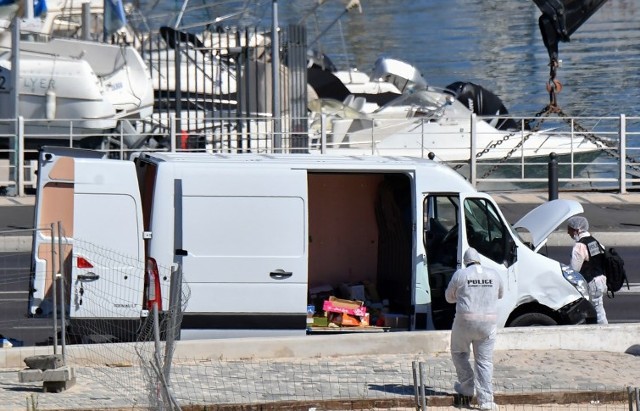 A van rammed into two bus stops in the French port city of Marseille on Monday, killing one person and injuring another, but investigators ruled out terrorism as a motive, police said.

The driver of the van, arrested in a third location, was a 35-year-old from the Grenoble region in eastern France who was being treated for psychological problems, a Marseille police official said.

"The terrorist motive is completely rejected," the official, who spoke on condition of anonymity in keeping with French law enforcement practice, said.

The collisions at the bus stops about 5 kilometers (3 miles) apart came days after back-to-back van attacks in Barcelona and Spanish resort town of Cambrils killed 15 people. Daesh claimed responsibility for the double attacks.

It was the second time in a week in which a driver in France with mental health problems allegedly killed a person with a vehicle and was thought by authorities to have acted deliberately, but without terrorist intent.

The Marseille driver, who has not been identified by name, was arrested in the scenic Old Port area of France's second-largest city and held for questioning. BFM-TV said a witness noted the van's license plate number and was able to give it to police, allowing them to make the arrest.

Nearly an hour passed between when the first bus stop was slammed into and the second, the police official said. She could not confirm reports in the regional newspaper La Provence that the white van had been stolen.

A man was injured at the first bus stop in a working class northern district filled with housing projects, David-Olivier Reverdy of the Alliance police union said.

The van later rammed into another bus stop in a second neighborhood, killing a woman. The driver steered onto the curb to crash into the glass-sided bus shelter then sped away, one witness said.

"We heard a loud noise, like a car accident, and we came to figure out what happened," Nicolas Negre, 32, an employee at a nearby fast food restaurant, said. "We saw ... a person lying inert, with blood on her, and the van leaving very quickly, moving fast, burning rubber."

Negre said the gruesome scene made clear that "he had to climb the pavement ... He hit and then left very quickly"

La Provence reported that the suspect came to Marseille specifically for psychiatric treatment in a specialized institution. The paper did not name its sources and the police official could not confirm the report.

On Aug. 14, a driver rammed his car into a crowded pizzeria east of Paris, killing an adolescent girl and injuring a dozen other people.

A prosecutor has described the driver, a 32-year-old security guard, as under the influence of drugs and showing signs of paranoia, but not motivated by extremist views. He is facing murder charges after a psychiatric exam determined his judgment was not impaired and he could be held be held legally responsible for his actions.