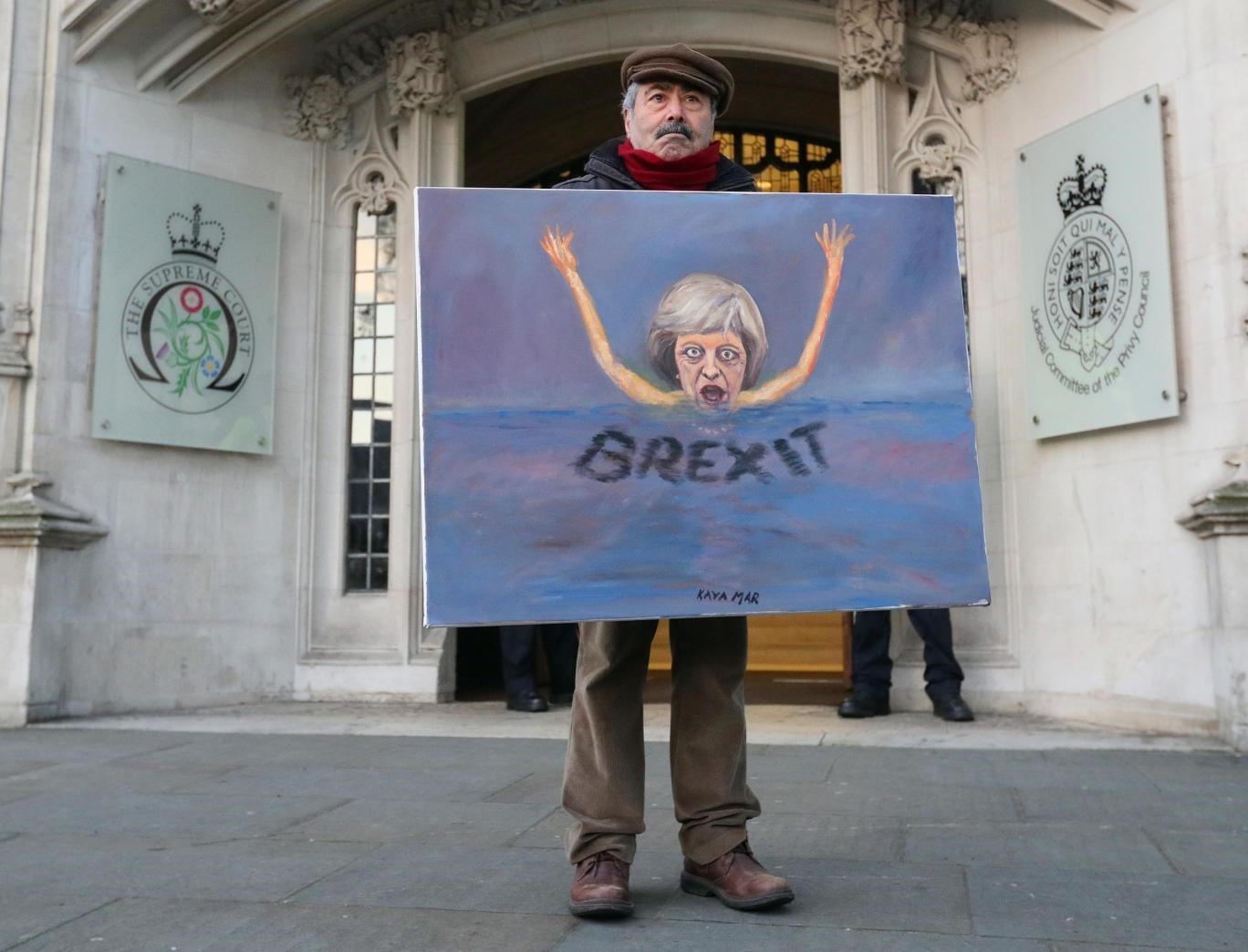 Satirical artist Kaya Mar poses with a Brexit-themed artwork depicting British PM Theresa May, as he stands outside the Supreme Court in London in January (AFP Photo)
by Aug 23, 2017 12:00 am

Britain will outline its plans on Wednesday to escape the "direct jurisdiction" of the European Court of Justice after Brexit, one of Prime Minister Theresa May's main aims in talks to unravel 40 years of European Union membership.

In one of the most politically sensitive documents Britain has published this month to try to nudge negotiations with the EU forward, the government will show little compromise in what it calls a paper to "reinforce the message that after Brexit, the UK will take back control of its laws".

The European court, or ECJ, is hated by many pro-Brexit lawmakers in May's governing Conservative Party, who say it has slowly sucked power from British courts and parliament. But for the EU, the Luxembourg-based court is the ultimate arbiter of EU law and must protect its citizens, even those living in Britain.

"We have long been clear that in leaving the EU we will bring an end to the direct jurisdiction of the Court of Justice of the European Union in the UK," a government source said.

"This paper takes the next steps as we prepare to engage constructively to negotiate our approach to this," the source said, referring to the fourth paper Britain has released this week to try to move the negotiations beyond discussion of a divorce settlement and on to future ties.

It is no surprise that the ECJ has become a major hurdle to an agreement on guaranteeing the rights of expatriates, one of the easier aspects of the Brexit talks which, more than a year since Britain voted to leave the EU, have moved slowly.

A joint status document, published last month, comparing the EU and British positions shows that talks on those rights have come unstuck because of a dispute over the role of the ECJ.

Using a traffic light system to gauge progress in various areas, the role of the ECJ is beyond the red showing disagreement and is referred "for discussion in the governance group".

In the paper on the ECJ, the source said Britain would try to show "examples of existing ways of resolving disputes in international agreements without the CJEU (Court of Justice for the European Union) having direct jurisdiction", and it would be unprecedented if the court had jurisdiction over a non-member.

"The paper will explore a variety of precedents ... to demonstrate that it is normal for the EU to reach agreements with third countries without the CJEU having direct jurisdiction over them."

The "future partnership paper" on judicial and political dispute resolution, which could prompt a stern response from the EU, is part of Britain's strategy to try to force the EU into discussing future ties alongside discussion of the divorce.

But the EU says it must see "sufficient progress" in the first stage in talks - on the rights of expatriates, Britain's border with EU member Ireland and a financial settlement - before moving on.

"We need to talk about the future very soon," another British source said, echoing comments from all sides that the "clock is ticking".