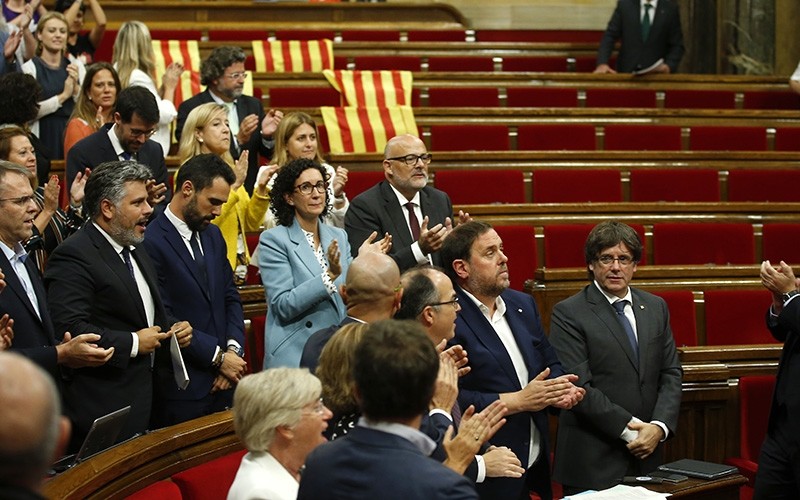 Catalonia regional President Carles Puigdemont, right, stands with others parliamentarians on their seats, after the voting during a plenary session at the Parliament of Catalonia in Barcelona, Spain, Wednesday, Sept. 6, 2017 (AP Photo)
by Compiled from Wire Services Sep 07, 2017 12:00 am

Spain's state prosecutors office said on Thursday it would present criminal charges against members of the Catalan parliament for on Wednesday voting to hold an independence referendum, which the Spanish government says is illegal.

The state prosecutor-general, Jose Manuel Maza, told reporters that his office would also present criminal charges against members of Catalonia's government for signing off on the law.

Maza said he had asked Spain's security forces to investigate any preparations by the Catalan government to hold the referendum.

Maza said two different lawsuits are in the works, one that seeks to punish members of Catalonia's parliament who allowed the debate and vote on the legal framework of the planned Oct. 1 referendum, and a separate one against the executive branch of the regional government, whose members officially called the referendum.

He said the officials could be charged, among other things, with disobedience, abuse of power and embezzlement.

The state prosecutor's office has also instructed officials and police forces in Catalonia — the northeastern region whose capital is Barcelona — to investigate and stop any actions taken toward the celebration of the referendum.

A majority of Catalonia's parliament voted on Wednesday to hold the referendum on splitting from Spain on Oct. 1.