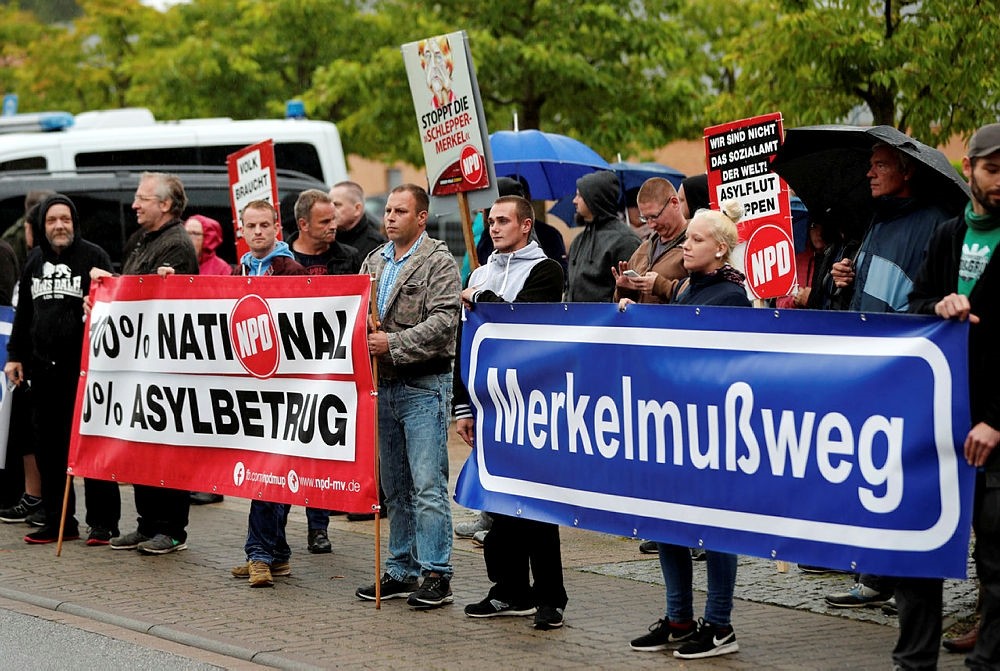 Protesters hold sign that reads ,Merkel must go, prior to the election campaign rally of German Chancellor Angela Merkel in Wolgast, Germany, September 8, 2017. (REUTERS Photo)
by Sep 08, 2017 12:00 am

German Chancellor Angela Merkel was greeted with catcalls and a volley of tomatoes as her car entered the small north-eastern town of Wolgast for an election campaign event on Friday.

Police said the chancellor's car was hit by tomatoes as a crowd of about 150 right-wing demonstrators whistled, chanted "Get lost" and booed. Supporters of the neo-Nazi-linked National Democratic Party (NPD) and the anti-immigrant Alternative for Germany party were among the jeering protesters.

Wolgast, located in the coastal state of Mecklenburg-Vorpommern near Merkel's own electoral district, is part of an area known for supporting far-right groups.

The NPD - a party that other groups have repeatedly tried to ban - once dominated here, though much of that support has since shifted to the AfD, which stands poised to enter the federal parliament this month.

Merkel, leader of Germany's centre-right Christian Democrats (CDU), has forced her campaign tour into areas where opposition to her is strong, especially in light of her 2015 decision to open Germany's borders to refugees - a move she has never entirely backed away from.

It was also not the first tomato launched at the chancellor this week. Flecks of one hit her at a stop in the southern university town of Heidelberg on Wednesday. Other stops in eastern Germany have been beset by boos, whistles and shouting crowds.

Resistance to Merkel's policies, or more broadly to the German political establishment, appeared to extend to her junior coalition partners, the Social Democrats: Foreign Minister Sigmar Gabriel of the SPD also got booed during a Friday appearance in Dresden.

Merkel has insisted that she will keep going to these areas where her popularity is low to show those who support her more liberal policies that they are not alone. At most of the campaign venues, despite the opposition, many people have also cheered her.

Wolgast was her second demonstration of the day. Speaking earlier in Strasburg, where the AfD won three directly elected seats in state elections last year, Merkel had her speech interrupted several times. A group of about 25 people held a protest, which was attended by NPD supporters as well as far-left groups.

In Wolgast, she tried to call the protesters to account.

"There are some, who scream and whistle. I don't think that's what we need to move Germany forward," she said. However, even those comments were interrupted by occasional shouts of "Where is the Christianity in your party?"

Nonetheless, Merkel urged those who turned out to the event to vote, pointing to improving employment levels. But she urged her fellow Germans to keep trying to do better.

"It's not ordained by God that in 10 years we'll still be building the best cars in the world," a reference to the troubles facing Germany's car industry as diesel cars, a strength of German carmakers, fall out of fashion as drivers move to electric vehicles.

In Strasburg, she said more federal agencies should be set up in rural areas to improve quality of life, create jobs outside the cities and bring more services to these areas.

German elections are set for September 24.

According to data released Friday by public broadcaster ZDF, Merkel's CDU is polling at 38 per cent nationally, while the centre-left Social Democrats are at 22 per cent.

The Politbarometer poll shows the AfD winning 9 per cent of the vote.