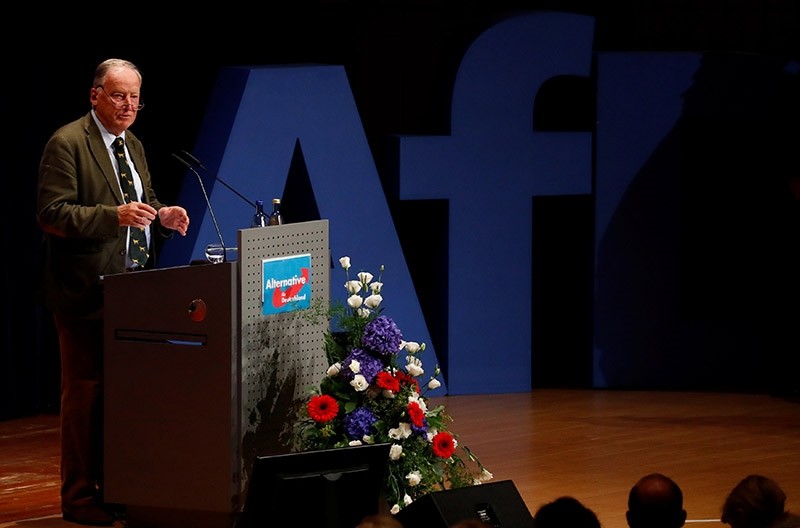 Alexander Gauland of Germany's far-right Alternative for Deutschland (AfD) speaks during a campaign in Pforzheim, Germany September 6, 2017. (Reuters Photo)
by Daily Sabah with Reuters Sep 11, 2017 12:00 am

German prosecutors have launched an investigation into remarks by an election candidate for the far-right Alternative for Germany (AfD) party that Germany's Integration Minister Aydan Özoğuz, who is of Turkish origin, should be "dumped back to Anatolia."

The latest polls predict the AfD will win between 8 and 11 percent of the vote in Germany's federal elections on Sept. 24, but Chancellor Angela Merkel, whose conservatives have a 13-point lead over their main rivals, the Social Democrats (SPD), has ruled out any coalition with the party.

Alexander Gauland, a co-founder of the AfD who heads the party in the state of Brandenburg, made the comment during a campaign speech in central Thuringen state's Eichsfeld.

Gauland is likely to be elected to parliament, surveys show. The AfD has never held any Bundestag seats.

He later conceded that his choice of words was "a little too tough" but repeated that Özoğuz, "had no business being in Germany" after she said that a "specific German culture" was "unidentifiable" beyond the German language.

Top prosecutor in the town of Muehlhausen, Ulf Walther, said he had launched the investigation after receiving multiple complaints and that he would seek to establish whether Gauland could be charged with "incitement to hatred" over his comment about Integration Minister Özoğuz.

Walther said he did not expect the investigation to be completed before the election.

Founded in 2013 as an anti-European Union party, the AfD shifted its focus after the euro zone debt crisis eased off and began to campaign against immigration, fuelled by Merkel's decision in 2015 to open Germany's borders to over a million migrants, many fleeing war in the Middle East.

But the party has also been hit by a string of scandals and infighting at the top.

Walther's office was able to launch the investigation because Brandenburg did not offer immunity to state legislators like other German states. But he said Gauland would be covered by federal immunity if he wins a seat in the Bundestag.

In that case prosecutors would need to seek a waiver of the immunity to proceed with an investigation, he said. Gauland would also get an opportunity to offer his view on the complaints.

Following Gauland's much debated comments about the integration minister, several SPD and the Greens politicians backed Özoğuz in Twitter posts, calling Gauland and the populist AfD party "racist" and, using hashtags such as #NoAfD and #Niewieder (never again).

German-born Aydan Özoğuz was elected deputy chairperson of the SPD in 2011, and has been serving as a Minister of State in the German Chancellery and Commissioner for Immigration, Refugees and Integration since 2013.