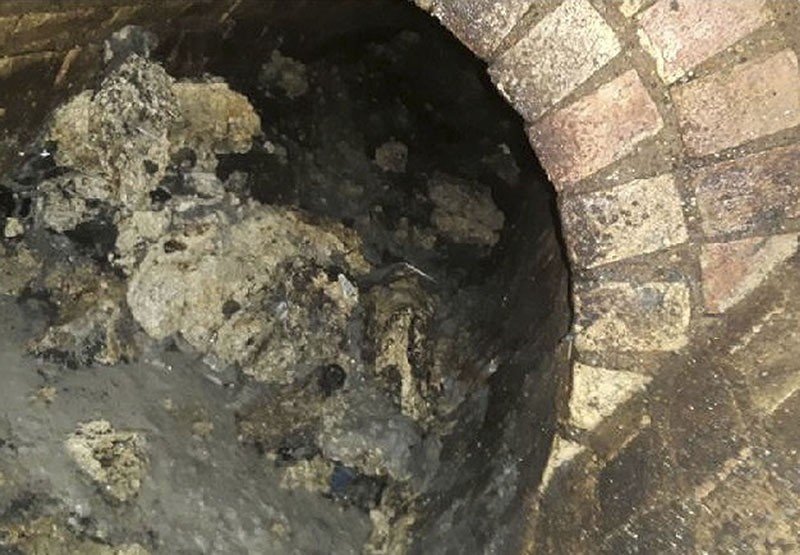 In this undated handout photo issued by Thames Water on Tuesday, Sept. 12, 2017, a view of part of a fatberg inside a sewer in Whitechapel, London. (Thames Water via AP)
by Compiled from Wire Services Sep 13, 2017 12:00 am

One of the biggest "fatbergs" ever seen in Britain - a ball of fat as long as three soccer pitches - has been found blocking a Victorian-era, east London sewer.

"It's a total monster and taking a lot of manpower and machinery to remove," said Thames Water's head of waste networks, Matt Rimmer. "It's one of the largest we've ever seen."

The rock-solid mass of wet wipes, nappies, fat and oil weighs as much as 10 double-decker buses, or some 130 tons. Images show that the sewer totally blocked by the 250-metre (273-yard) long fatberg.

Work in Whitechapel to remove the blockage started this week and involves an eight-strong crew using jet hoses to break up the mass before sucking it out with a tanker. The crew removes an average of 20 to 30 tons a day.

"It's basically like trying to break up concrete," said Rimmer. "It's frustrating as these situations are totally avoidable and caused by fat, oil and grease being washed down sinks and wipes flushed down the loo."

"Bin it, don't block it" was the message, he added.

Four years ago a similar but smaller fatberg was found in a sewer in Kingston, southwest of London.

Described at the time as Britain's biggest ever fatberg, it weighed 15 tons and took ten days to clear up.

Thames Water clears up an average of three fat related blockages and five blockages caused by items including wet wipes every hour from its sewers in London and the Thames Valley.

Meanwhile, a campaign to name the fatberg might anger someone across the Atlantic.

"Calling all #FatbergFans. What should we call the biggest EVER #fatberg we've recently found in London?" Thames Water said on Twitter, asking for "family friendly" replies.

Among the first suggested names in reply to the Thames Water tweet were "Donald", "Donald Drumpf", "Trump" and "Selfish."