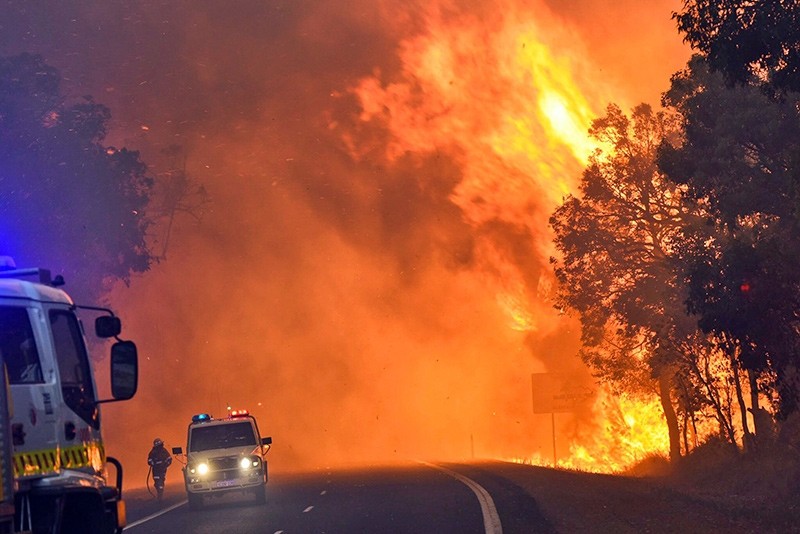 Firefighters battle a massive blaze near Yarloop in Western Australia (AFP File Photo)
by Sep 13, 2017 12:00 am

A series of out-of-control bushfires fueled by windy conditions have badly damaged a historical rail museum and are threatening to destroy homes in Australia's New South Wales.

Schools had to be evacuated in some areas. New South Wales Rural Fire Service said 1,000 firefighters were battling almost 100 blazes across the state, and 38 were still uncontained as of late Wednesday.

"It's honestly full on. All the smoke and ash closed the high school and a few day care centers," local resident Tim Webster told the Australian Associated Press.

Temperatures reached the mid-30-degree-Celsius range in parts of the state, a new record for September, said the Bureau of Meteorology.

Earlier Wednesday, a fire at Richmond Vale broke containment lines and burned more than 700 hectares at 60 kilometers per hour, according to the local fire department.

Water-bombing aircraft, three helicopters and some 100 firefighters could not prevent the local heritage-listed Richmond Vale Railway Museum from being badly damaged.

"There's a lot of stuff that was historically significant to this area that is now just gone," said museum chairman Peter Meddows.

"An 1880 restored coal hopper is now just ashes. It's heartbreaking. It was total devastation," he told reporters.

Nearby, a fire east of Kurri Kurri forced the evacuation of Black Hill Public School and 500 students.

In Sydney's north, police said they had arrested a 50-year-old man and charged him with starting the blaze at Beacon Hill.