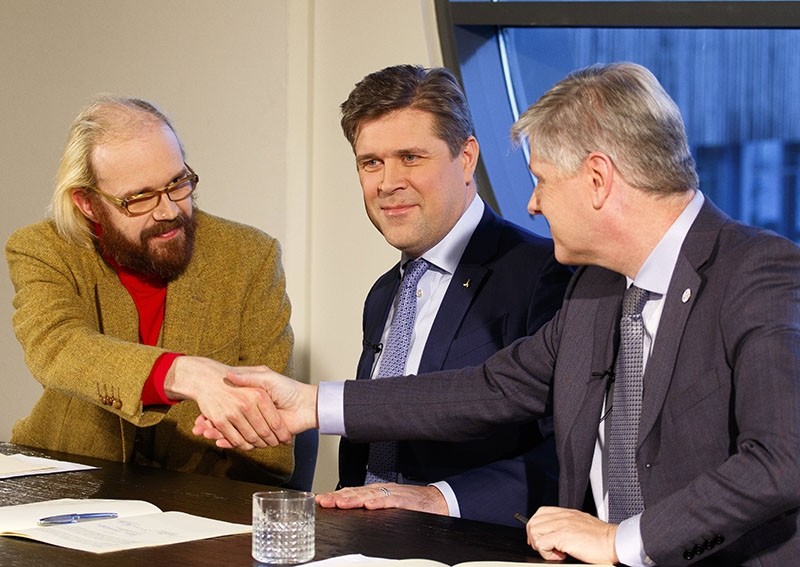 One of Iceland's three coalition parties said on Friday it would quit the government formed less than nine months ago, citing a "breach of trust" after the prime minister's party allegedly tried to cover up a scandal involving his father.

That leaves the country, whose economy was wrecked by the collapse of its banking sector nearly a decade ago, possibly facing its second snap election in less than a year after the previous government was felled by the Panama Papers scandal over offshore tax havens.

"The board of Bright Future has decided to terminate cooperation with the government of Bjarni Benediktsson," the party said in a statement on Facebook. "The reason for the split is a serious breach of trust within the government."

The news knocked the Icelandic crown as much as 1 percent lower against the euro and the dollar. The scandal centers on a letter written by Prime Minister Benediktsson's father to help an old friend convicted of sex offences against children have his criminal record expunged.

The Ministry of Justice, under Minister Sigridur Andersen, a member of Benediktsson's Independence Party, had initially refused to disclose who had written the letter of recommendation but was later ordered to do so by a parliamentary committee.

Andersen told broadcaster Stod 2 that she had informed Benediktsson about his father's involvement last July, but had not disclosed that information to anyone else.

The third party in the center-right coalition, which had a majority in parliament of just one seat and took two months to form following an election last year, called for new polls.

"In light of the situation, the Vidreisn (Reform party) ... thinks the right thing to do is to call an election immediately," it said in a statement.

The Independence Party had no immediate comment when contacted by Reuters on Friday but one of its lawmakers dismissed talk of a new national vote.

"I do not think that it's feasible to head into an election less than 10 months since the last election," Brynjar Nielsson said as he headed into a meeting to discuss the situation.

The prime minister's father, Benedikt Sveinsson, confirmed in a statement on Friday that he had signed a letter supporting the friend's application to have his "honor restored", a procedure that effectively erases a person's criminal record. Among the requirements to obtain the status is a letter of recommendation from a close friend or associate.

The man convicted in 2004 of having raped his stepdaughter almost every day for 12 years.

Smari McCarthy, a lawmaker for the anti-establishment Pirates Party, said on his Twitter account: "Iceland's Jimmy Savile case: our PM, who was in the Panama Papers, has hid for two months his father's support for a pedophile's clemency."

After serving his sentence, the convicted child molester had applied for a "re-establishment of honor" to enable him to expunge his criminal record, which is permitted under Icelandic law and is subject to the support of persons of good character.

Sveinsson said he had not discussed the letter with anyone.

"In light of all that has come forth lately, I'd like to apologize to all those who have been hurt because of the matter," he said in the statement.

President Gudni Johannesson was not immediately available for comment but analysts said he was likely to ask the current government to stay in place until a successor coalition is formed or a new election called.

"It would not necessarily be a surprise if the prime minister wants to call an election," said Baldur Thorhallsson, a political scientist at the University of Iceland.

"There is great political uncertainty in Iceland currently."

The central bank cut interest rates four times in the year to June to tame the crown, which has soared on the back of a tourism boom that has helped the economy recover from years of crisis but increased the risks of overheating. The strong currency is also hurting Iceland's exports.

"I think if there's going to be another election and possibly the chance of a more left-wing government, then that probably decreases the chance of monetary policy being loosened any further in the future," said Brown.

"That could be quite important."