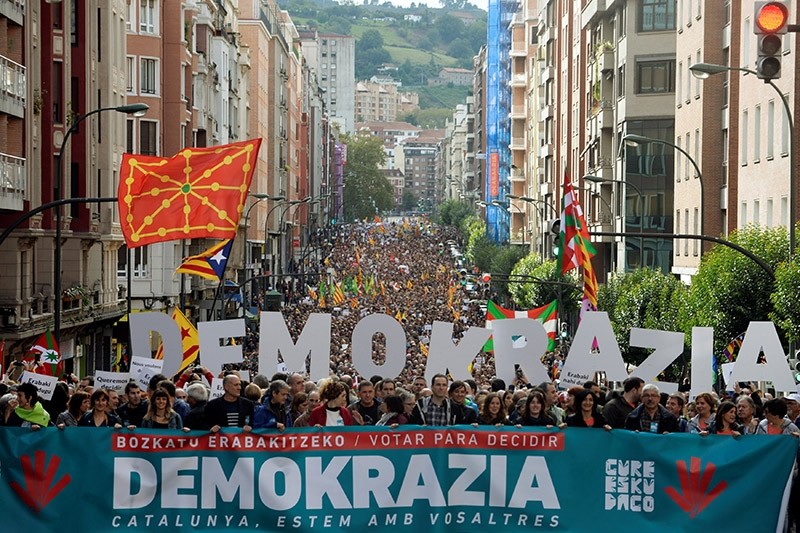 More than 700 mayors from Catalonia met Saturday in Barcelona in a show of strength amid pressure from Spain's central government not to hold an independence referendum for the northeastern region.

Political tensions in Spain are increasing as the proposed voting date of Oct. 1 nears. The Catalan government has been scrambling to push forward the vote, despite the central government's warnings that local municipalities are not allowed to use public buildings for it and mayors can be legally prosecuted for it.

Hundreds of mayors stood Saturday next to regional President Carles Puigdemont and Barcelona Mayor Ada Colau in Barcelona, the capital and main city in the region.

"We will not be intimidated. This is not about independence, it's about our rights," said Colau.

Puigdemont thanked the mayors for not backing down and insisted that most Catalans are determined to press ahead despite the ban.

"Do not underestimate the Catalan people," he warned.

Catalonia's regional police force is under orders to arrest the mayors if they refuse to appear for questioning in an investigation into the vote, which Spain's constitutional court has suspended, State Prosecutor Jose Manuel Maza's office said. The order puts regional police in the uneasy position of carrying out commands from Madrid in their own towns and cities.

If mayors and their municipalities cannot help organize the balloting, the independence vote is unlikely to proceed.

So far, 740 of 948 municipal leaders have said they would allow municipal spaces to be used for the referendum, according to the Association for Municipalities for Independence (AMI).

Spanish police have raided several print shops and newspaper offices in recent days in a hunt for voting papers, ballot boxes and leaflets to be used for the referendum.

Catalonia's top court on Friday issued a warning to seven newspapers not to publish campaign notices for the referendum, a court spokesperson said.

On Saturday, Prime Minister Mariano Rajoy called for a return to "rationality and legality" and promised to block the vote.

"The only thing I ask of (Catalan) mayors is that they comply with the law, and as such don't participate in an illegal referendum," Rajoy said.

On Friday, Spain's central authorities also announced they have increased their control over Catalonia's regional spending to make sure that no funds are diverted to paying for the independence referendum

The prosperous Catalonia region generates a fifth of the country's 1.1-trillion euro economy. It enjoys ample self-government, running its own police, and has considerable powers over health and education. Taxes, foreign affairs, defense and infrastructures are in the hands of Spain's central authorities.

Polls show a minority of Catalans want independence, although a majority want the chance to vote on the issue.