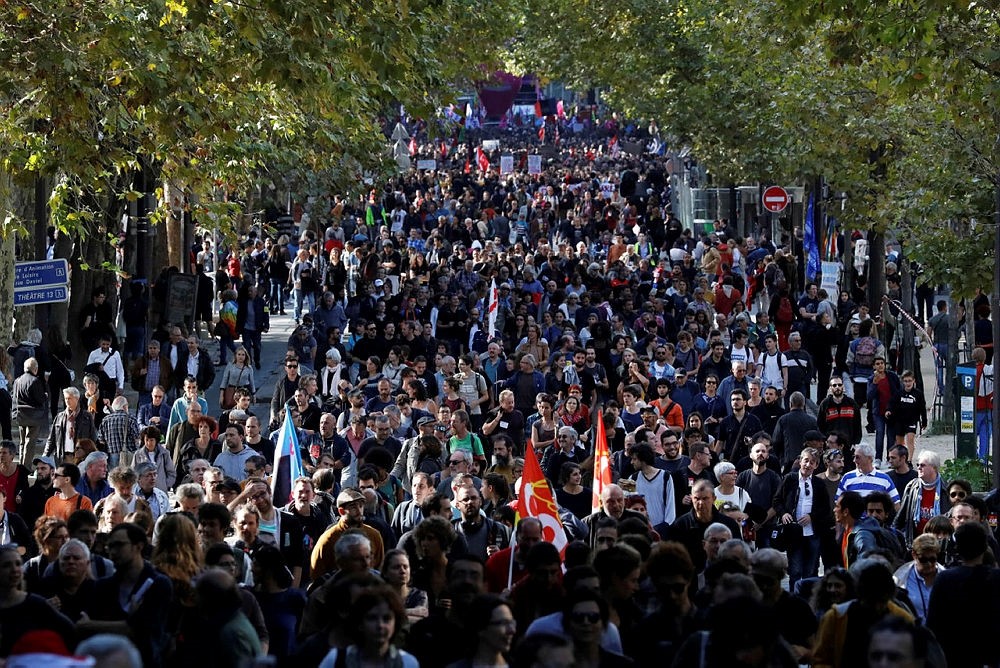 Tens of thousands of French protesters demonstrated Thursday against an imminent overhaul of national labor law, hoping to build pressure on President Emmanuel Macron days before his flagship reforms enter into force.

Initial figures suggested turnout would be lower than last week, however, when hundreds of thousands joined the first major street protests organised by trade unions since Macron was elected in May.

If confirmed, weaker attendance would be welcomed by the 39-year-old centrist president, but he will face more -- and potentially larger -- protests on Saturday called by the hard-left political party France Unbowed.

"What's important today and in the days and weeks ahead is that the movement gets bigger," said Philippe Martinez, the head of the Communist-backed CGT union behind Thursday's marches.

But Macron has insisted his government will not compromise on the reforms which make it easier for companies to hire and fire and were worked out during three months of negotiations with union leaders.

"Democracy does not happen in the street," Macron said in New York on Wednesday, insisting he has a mandate for change after sweeping the board in presidential and parliamentary elections in May and June.

Philippe Braud, a professor emeritus of Sciences Po university, said the government has the upper hand and that the protest movement in France "has been weakening for the past 10 years".

"There's a sort of resignation among the French to reforms that are seen as necessary," Braud told AFP, adding that their passage will be a "big victory for Macron".

The president has also been boosted by splits in the labor movement, with the CFDT and FO unions so far declining to back the protests and strikes.

Disruption at companies and to public services was limited last week and again on Thursday.

"When the unions, when the workers are divided, that is generally when the company owners win," Martinez acknowledged Thursday as he called for his counterparts to join in.

The reforms, which are being fast-tracked via executive orders, are designed to give employers more flexibility to negotiate pay and conditions with their workers while reducing the costs of firing staff.

Public opinion is divided, according to a recent BVA poll, with most saying they think the reforms will boost France's competitiveness but fail to improve employees' working conditions.

Macron insists the changes will lower stubbornly high unemployment of 9.5 percent -- a view backed by the International Monetary Fund on Thursday.

The Washington-based lender said the labor reforms, coupled with planned tax cuts and reductions in public spending, would help increase economic growth, which it forecast to reach 1.6 percent this year.

"Medium-term prospects will critically depend on the implementation of the reform agenda," it said in a report on France, adding that Macron had an "important window of opportunity".

Once his cabinet approves the labor measures Friday, they are expected to be published in the official gazette and enter law.

The use of executive orders is a way to implement the changes quickly and avoid a prolonged battle in the streets -- as seen last year when Macron's predecessor Francois Hollande made similar changes to labor law.

While the strategy may succeed in overhauling France's complex workplace regulations, some critics see the method as reinforcing perceptions of Macron as a monarchical leader.

Criticism of him as aloof and sometimes authoritarian have contributed to sharp falls in his popularity, with his approval rating languishing at 44 percent according to an Odoxa poll out on Monday.

The phrase became a rallying cry for protesters, with many of them proudly declaring themselves "slackers" during last week's demonstrations.

Jean-Luc Melenchon, head of the France Unbowed party, has slammed the reforms as no less than a "social coup d'etat".

The radical leftist has emerged as the figurehead for the opposition against Macron as France's other political parties squabble over the election results or search for new leaders.