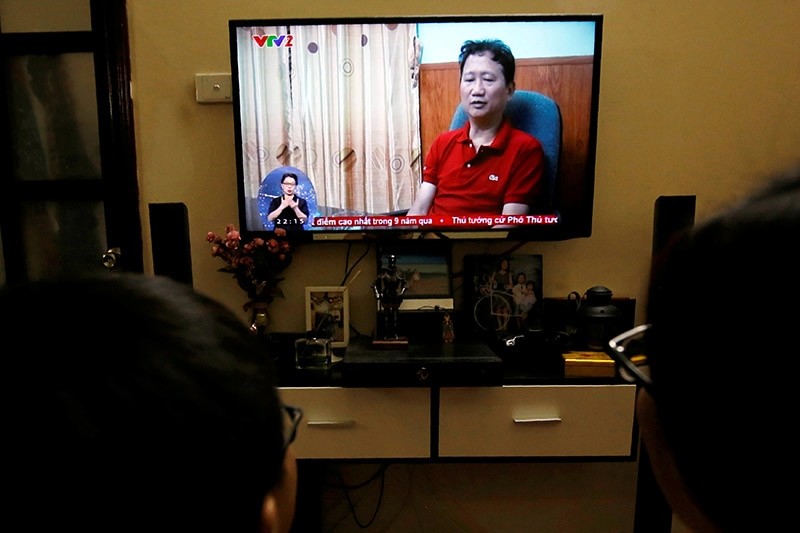 An image of Vietnamese former oil executive Trinh Xuan Thanh is seen on a TV screen on state-run television VTV, saying he turns himself in at a police station in Hanoi, Vietnam August 3, 2017. (Reuters Photo)
by reuters
Sep 22, 2017 12:00 am

Germany said on Friday it had ordered a second Vietnamese embassy official to leave the country, after the alleged kidnapping of a Vietnamese businessman who had applied for asylum and was facing corruption allegations back home.

Germany last month accused Vietnam's intelligence agency of kidnapping Trinh Xuan Thanh, who is wanted in the southeast Asian country on charges of financial mismanagement that caused losses of around $150 million.

Officials at Vietnam's Ministry of Foreigh Affairs were not immediately available for comment on Friday. Vietnam last month denied the accusations and said Thanh had returned home voluntarily.

"We have also declared a second employee of the Vietnamese Embassy persona non grata," a spokesman for the German Foreign Ministry said in a statement.

"He now has four weeks to leave Germany with his family."

The Foreign Ministry also said German officials had informed the Vietnamese ambassador on Thursday that Germany was temporarily suspending the strategic relationship between the two countries.

It added that Vietnam had not complied with demands to make an apology and provide assurances such incidents that broke German and international laws would not happen again.

Federal prosecutors in August took over an investigation into the alleged kidnapping, citing new evidence that Thanh and a companion were likely taken to the Vietnamese embassy in Berlin before going back to Vietnam.

German media reported last month Thanh had been taken from the Tiergarten, a large forested park in central Berlin, by armed men on July 23.

Foreign Minister Sigmar Gabriel said in August he had been "taken out of Germany using methods which we believe one sees in thriller films about the Cold War".

Czech authorities have arrested and extradited to Germany a Vietnamese intelligence agent suspected of involvement.