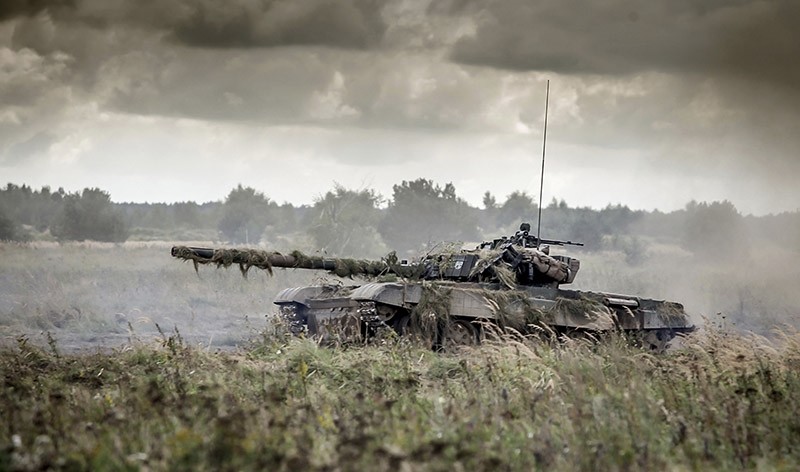 In this picture publicly provided by the Polish Armed Forces General Command a tank takes part in the Dragon 17 exercise in Drawsko Pomorskie, Poland, Wednesday, Sept. 21, 2017. (AP Photo)
by Associated Press Sep 22, 2017 12:00 am

Thousands of Polish and other NATO troops have launched major defensive exercises in Poland's north amid security concerns raised by war games recently held by neighboring Russia and Belarus.

The Dragon-17 exercise involves some 17,000 land, air force and navy troops and some 3,500 units of equipment and runs through Sept. 29. For the first time the biannual drill is being joined by Poland's new Territorial Defense Forces, which train civilian volunteers to support regular troops. Cybersecurity is also being tested.

He said the drills were of defensive nature and contrasted them with the just-ended Zapad (West) 2017 maneuvers. Dworczyk said the joint Russian-Belarusian war games had a "very clear offensive trait."

He earlier said the NATO drills now underway test defensive operation between Polish troops and those deployed in Poland by NATO and by the U.S. in response to the region's concerns over Russia's military activity.

The scenario for the exercise sees the troops reacting to "attempt at taking control of a disputed territory though hybrid actions," Dworczyk has said, noting it was inspired by Russia's 2014 annexation of Crimea.

Dworczyk also noted that security experts in Poland and in the region are concerned that Russia may leave some military units in Belarus following the Zapad (West) 2017 maneuvers, which wrapped up Wednesday.

NATO members, including the Baltic states and Poland, have suggested the number of troops was higher than the declared 12,700 and have questioned Moscow's intentions in holding such major war games.