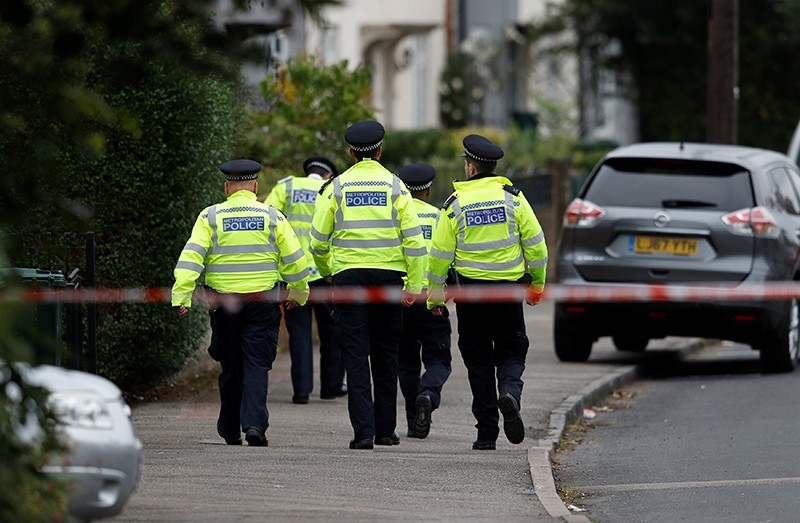 Police officers walk behind cordon tape set up around a property being searched after a man was arrested in connection with an explosion on a London Underground train (Reuters Photo)
by Associated Press Sep 22, 2017 12:00 am

British police on Friday charged an 18-year-old man with attempted murder and causing an explosion over last week's bomb attack on the London subway.

The Metropolitan Police force said Ahmed Hassan will appear in court later, accused of planting the bomb at Parsons Green station a week ago.

Hassan is accused of attempting to "murder persons traveling on a District Line train" on Sept. 15, and of using a chemical compound known as TATP to cause an explosion likely to endanger life, police said.

Hassan, who is reported to be from Iraq, was arrested Saturday at the port of Dover, departure point for ferries to France. After his arrest, police searched the suburban home of a couple who had fostered more than 200 children, including refugees from the Middle East.

Thirty people were injured when the homemade bomb — hidden in a plastic bucket that was place in a plastic supermarket bag — partly detonated at the height of the morning rush hour.

The attack sparked a huge hunt for the perpetrators and prompted officials to briefly raise the national terrorism threat to the highest level, "critical."

London police chief Cressida Dick said Friday that the "very dangerous" bomb was packed with shrapnel and the carnage could have been much worse.

Three other male suspects remain in custody over the attack, but haven't been charged.