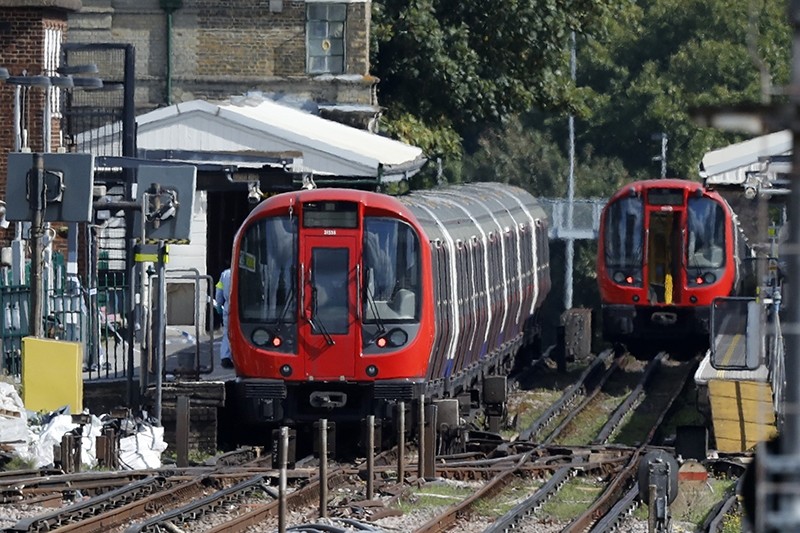 This is a Sept. 15, 2017 file photo of a police forensic officer walks beside the train where an incident happened at Parsons Green subway station in London. (AP Photo)
by Compiled from Wire Services Sep 25, 2017 12:00 am

British police made a new arrest on Monday in their investigation into a bomb attack on a London underground train earlier this month, bringing the number of people in custody to four.

The man, 20, was detained at a house in the Welsh capital Cardiff by counter-terrorism officers, London police said. He is the seventh man to have been arrested over the attack at Parsons Green station in London on Sept. 15 which injured 30 people.

It was Britain's fifth major militant attack so far this year -- four of them in London and one in Manchester -- with the bloodshed claiming 35 lives.

Last Friday, teenager Ahmed Hassan appeared in court charged with attempting to murder passengers on board the train heading to central London from the southwest suburb of Wimbledon and causing an explosion likely to endanger life using the highly volatile triacetone triperoxide (TATP) - known as "the mother of Satan" - or another explosive substance.

The 18-year-old, from Sunbury-on-Thames, a town to the southwest of London, was remanded in custody until Oct. 13. The home-made bomb engulfed a carriage in flames, but apparently failed to fully explode.

Two other men, aged 25 and 30, who were arrested in Newport in Wales last week, are still being questioned by police while three others have since been released by detectives and face no further action. Searches are still ongoing at one address in Surrey, south of London, and in Cardiff.