Alternative for Germany enters Bundestag, first nationalist party to do so since 1933 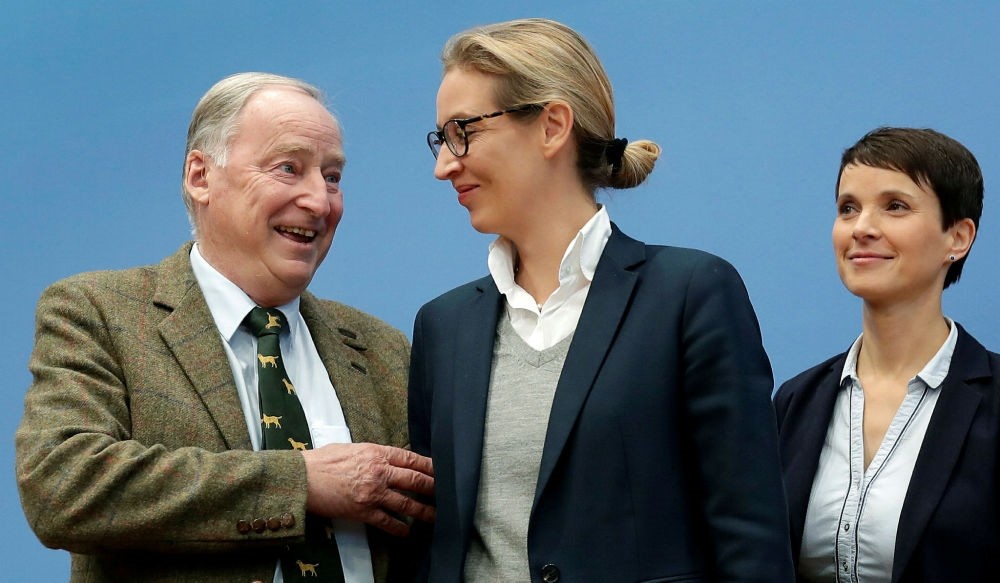 Despite the mainstream's view of the Alternative for Germany (AfD) as a hard-right or even a neo-Nazi party, its historic victory cannot be underestimated, as it is the first nationalist party to gain entry in the German Bundestag since Alfred Hugenberg's monarchist-nationalist German National People's Party got 52 seats in the federal elections of March 1933.

Winning 13 percent of the vote, up 8.2 percent from 4.7 since the last election in September 2013, the AfD's Alice Weidel and Alexander Gauland will enter the Bundestag as an official opposition party, voicing the concerns of the Germans who believe that Chancellor Angela Merkel is not handling the refugee and mass immigration issue correctly.

Frauke Petry, however, a popular figurehead in the party, will be getting a seat, saying that she would rather push the party in a more "conservative" direction. She had explained not so long ago that the AfD's members were behaving disorderly with some anarchic tones, which will be good for the party in its position of opposition, however it will not help it to become viable for government.

Merkel's Christian Democratic Union (CDU) and her allied Christian Social Union (CSU), led by Horst Seehofer, got just over 33 percent, down 8.4 from 41.5, and they have managed to maintain their status as the biggest party in the Bundestag, however they did lose 65 seats, down from 311 in 2013.

The Socialist Party of Martin Schulz on the other hand had their worst election result in the post-war era, getting just 20 percent and losing 40 seats, down from 193.

Other smaller parties didn't do badly either, and Merkel will probably be forced to work with them if she wants to retain the chancellorship.

The business-friendly Free Democratic Party (FDP) also managed to get in the parliament, winning 80 seats with just over 10 percent of the vote.

The Left party gained another five seats, bringing it up to 69 with a score of 9.1 percent, and the Greens managed to remain in the parliament with 67 seats, getting 9 percent.

This will also be the first time that six parties are represented in the German parliament since the 1950s.

In order for Chancellor Merkel to retain her office, she will probably have to create the so-called "Jamaica" coalition, which gets its name from the colors of the parties that would have to work together (black for the CDU/CSU, yellow for the FDP and green for the Greens), corresponding to the colors of the small island-nation in the Caribbean.

With the AfD in the Bundestag, with which nobody is willing to form a coalition, these parties might not sound too dissimilar to each other, however, they disagree on key points such as energy and taxes.

The Greens have announced that their main condition for entering a coalition with Merkel would be that Germany fully complies with its obligations to the 2015 Paris Climate Accord.

The FDP's Christian Lindner has announced that he too is willing to work with Merkel, however, his party staunchly opposes any sort of wealth taxes and rules out banning internal combustion engines as well.

Merkel had not ruled out working with the SPD, however it was them who refused to enter into a second consecutive "grand coalition" with the CDU.

Talking about Germany's seemingly fractured political landscape, she vowed to bring voters back together "through good politics."

Political analyst Steven Meissner told Russia Today that the AfD in parliament is Merkel's own creation.

"Merkel destroyed the SPD by crashing them on the left, but has opened a massive gap on the right," Meissner said, adding the space on the right "has now been filled with a new party."

She also said that Merkel's 2012 rhetoric of multiculturalism having "failed" did not add up with her decision to open up Germany's and de-facto Europe's borders to millions of refugees and illegal immigrants.

Dutch journalist Joost Niemoller characterized the AfD's victory as an "enormous psychological breakthrough for the Germans that AfD just became an important part of Bundestag now. So there will be now for the first time real discussions about immigration, which never happened before."