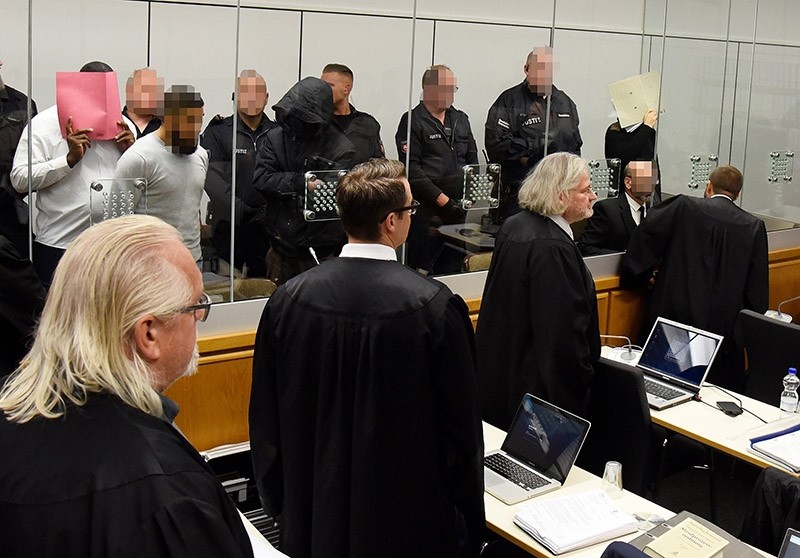 Defendant Ahmad Abdulaziz Abdullah A. (R), also known as Abu Walaa, and co-defendants arrive for the first day of his trail at the higher regional court (Oberlandesgericht, OLG) in Celle, Germany, 25 September 2017. (EPA Photo)
by Compiled from Wire Services Sep 26, 2017 12:00 am

An Iraqi man accused of recruiting terrorists for Daesh in Syria and Iraq, including two believed to have killed more than 150 Iraqi soldiers in suicide bombings, went on trial in a German court on Wednesday.

Four alleged members of the terrorist network he had set up also stood trial.

Prosecutors say the 33-year-old preacher, identified as Ahmad Abdulaziz Abdullah A. in court documents, recruited at least eight individuals who ended up traveling to the Middle East where they fought alongside Daesh terrorists.

Two died in two separate suicide bombing attacks against Iraqi army positions in 2015 in which more than 150 soldiers were killed, prosecutors said. The two recruits, identified as Mark and Kevin K, joined Daesh in 2014.

The main suspect, known by the nickname Abu Walaa, which in Arabic means Father of Loyalty, and the four others -- a Turk, a German, a Serbian-German dual citizen and a national of Cameroon -- were arrested in November in raids in the states of Lower Saxony and North-Rhine Westphalia. They have been held in custody since then.

The defendants have chosen to remain silent during the trial.

Prosecutors believe Abu Walaa preached at the Fussilet Mosque in Berlin, which was attended by failed asylum seeker Anis Amri who killed 12 people at a Christmas market in the German capital last year.

German intelligence services took pictures of Amri in Hildesheim some 10 months earlier, prompting speculation he had ties to the network. Amri was shot dead by police in Italy days after his rampage.

"The federal prosecutor essentially accused the suspects of being members of and supporting a foreign terrorist organization," a spokeswoman for the Higher Regional Court in the northern city of Celle said.

Michael Murat Sertoez, a lawyer for one of the suspects, said: "There will be a lot of protected witnesses who will testify and that is not acceptable for us".

Much of the prosecution's case rests on evidence collected by an unidentified informant who infiltrated the network for months.

But the witness is not expected to testify at the trial after Walaa urged his followers to kill the mole.

Walaa and his co-accused have not been charged with planning any attacks in Germany.

A previous recruit of Walla, who joined Daesh in Syria but fled after becoming disgusted with the terror group's tactics, returned to Germany, where he was arrested in September 2016.

According to Spiegel, he turned on Walaa and provided crucial information in return for a reduced sentence.

Germany's security services estimate there are around 10,300 Daesh sympathizers in the country, compared to some 3,800 in 2011.

About 700 of them are considered dangerous and capable of a violent attack.