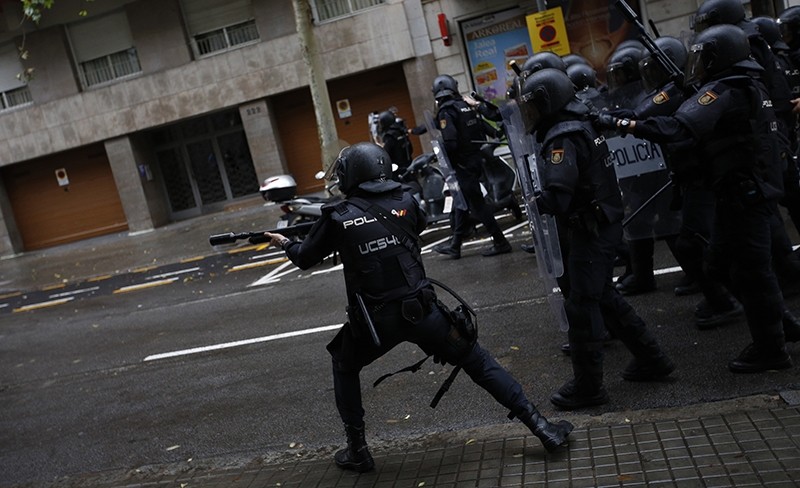 Spanish riot police shoots rubber bullet straight to people trying to reach a voting site at a school assigned to be a polling station by the Catalan government in Barcelona, Spain, Sunday, 1 Oct. 2017 (AP Photo)
by Compiled from Wire Services Oct 01, 2017 12:00 am

Catalonia's health services have increased the number of people injured by police during Sunday's disputed referendum to 844 people who were treated at hospitals.

The service says two people are in serious condition in hospitals in Barcelona. It also says that another person is being treated for an eye injury that fits the profile of having been hit by a rubber bullet.

Police fired rubber bullets near at least one Barcelona polling station, and have clashed with protesters throughout Catalonia.

Turull said that actions by Spanish National Police and Civil Guard forces on Sunday were politically motivated and showed "a clear motivation to harm citizens."

The police used force to try and shut down some polling stations in the north-east region and seize ballot papers.

The officers fired projectiles while trying to clear protesters who were trying to impede National Police cars from leaving after police confiscated ballot boxes from the voting center.

An AP photographer witnessed how several people had been injured during the scuffles outside Barcelona's Rius i Taule school, where some voters had cast ballots before police arrived.

Manuel Conedeminas, a 48-year-old IT manager who tried to block police from driving away with the ballot boxes, said agents had kicked them before using their batons and firing the projectiles, which were ball-shaped.

Social media has filled with images of officers in tense standoffs with crowds gathered at public schools and sport halls being used as polling sites.

Catalans began occupying the buildings last week in attempt to keep them open for voting.

In some instances, officers wearing helmets and carrying batons were seen dragging people away.

"We were forced to do what we did not wish to do," Spanish government delegate to Catalonia, Enric Millo, said.

Catalan regional president Carles Puigdemont cast his vote in Cornella del Terri. He could not vote in his regular voting station in Sant Julia De Ramis, outside of Gerona, after it was raided by police officers who smashed glass doors to enter.

"President Puigdemont votes. They cannot silence the voice of the people. We will vote and we will win," pro-independence campaigner Jordi Sanchez wrote on Twitter.

The Spanish government, enforcing a constitutional Court ban on the ballot, said late Saturday that police had shut down "the majority" of designated referendum sites, and had raided the hall where votes were due to be counted.

In recent days the central authorities have seized at least 12 million ballot papers, and millions of posters and leaflets; many websites have also been blocked.

Catalonian government speaker Jordi Turull said Sunday that given the difficulties faced by voters, they could cast their ballot at any open polling station they could find.

Catalonia has 7.5 million inhabitants and, accounting for roughly 20 percent of Spain's economic output, it is one of its wealthiest regions. It has a separate language, Catalan, a history of oppression from Madrid, and grievances about subsidizing the rest of Spain.

According to opinion polls, there is no majority support for independence among Catalans, but the 'yes' vote is widely expected to prevail Sunday as unionists have been urged to boycott the referendum.

Turnout is seen as critical: a high number would allow secessionists to claim they have a mandate for independence; a low one could seriously undermine their attempts to be taken seriously. But there are doubts that participation rates can be measured reliably.