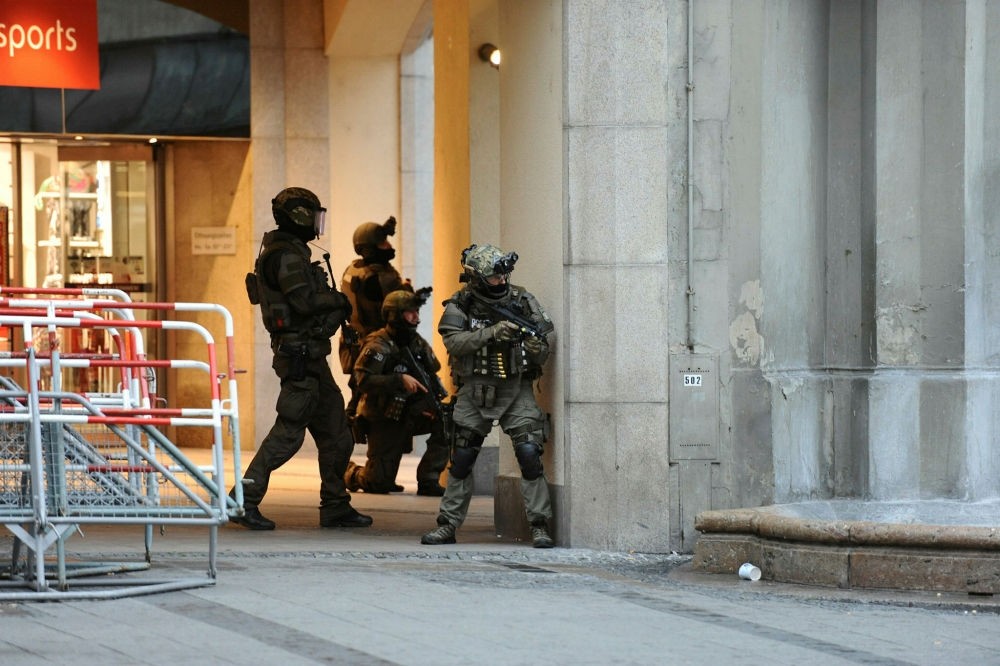 Heavily armed police forces operate at Karlsplatz square after a shooting in the Olympia shopping center was reported in Munich, southern Germany, July 22, 2016.
by Daily Sabah with Wires Oct 05, 2017 12:00 am

Contrary to police findings, experts have concluded that the shooter in an attack in Munich who killed nine people with immigrant backgrounds was motivated by far-right ideology in an example of the far-right threat in Germany

Contrary to police findings, investigators believed that the motivation of the attacker was disregarded and underestimated, according to the German public broadcaster Deutsche Welle (DW).

German Police had concluded that Sonboly was a deranged lone gunman obsessed with mass killings who drew no inspiration from Islamic militancy.

However, it is now believed that the gunman was obsessed with far-right extremist Anders Behring Breivik, whose massacre of 77 people in Norway came exactly five years before his own shooting rampage.

Earlier in August, a 32-year-old German man admitted in court that he sold the weapon used by the teenager, a court spokesman said, adding that the defendant told relatives he felt sorry for his actions.

The Munich Public Prosecutor's Office has charged the accused, identified only as Philipp K., as is customary in German law, with selling weapons illegally and nine counts of negligent homicide as well as five counts of negligently causing grievous bodily harm.

"A written statement was read, acknowledging that the accused had traded with weapons. The defendant expressed his regret that one of these firearms was used in the rampage here in Munich," court spokesman Florian Gliwitzky said.

"He offered his apologies to the relatives and with this, he also expressed that he was regretting his actions."

A spokeswoman for the public prosecutor said the suspect so far only had admitted to the charge of selling weapons illegally. She added that evidence revealed during the hearing showed that the suspect had far-right attitudes.

Authorities around Europe are concerned that secretive marketplaces make it too easy for criminals and militants to obtain weaponry that has traditionally been highly regulated across Europe.

Far-right offenses in Germany spiked last year to their highest level since 2001, amid growing anti-refugee and migrant sentiment in the country triggered by propaganda from far-right parties.

The lingering divisions became evident in the German national elections on Sept. 24, in which voters dealt mainstream political parties their biggest defeats in the post-World War II era, while the far-right Alternative for Germany (AfD) won 12.6 of the vote and entered parliament for the first time.

Support for the AfD and its "take your country back" platform was particularly strong in eastern Germany, fueled by anger about Chancellor Angela Merkel's decision to open the country's doors to 1 million, mostly Muslim, migrants in 2015.