Britain, EU clash over who takes next Brexit step 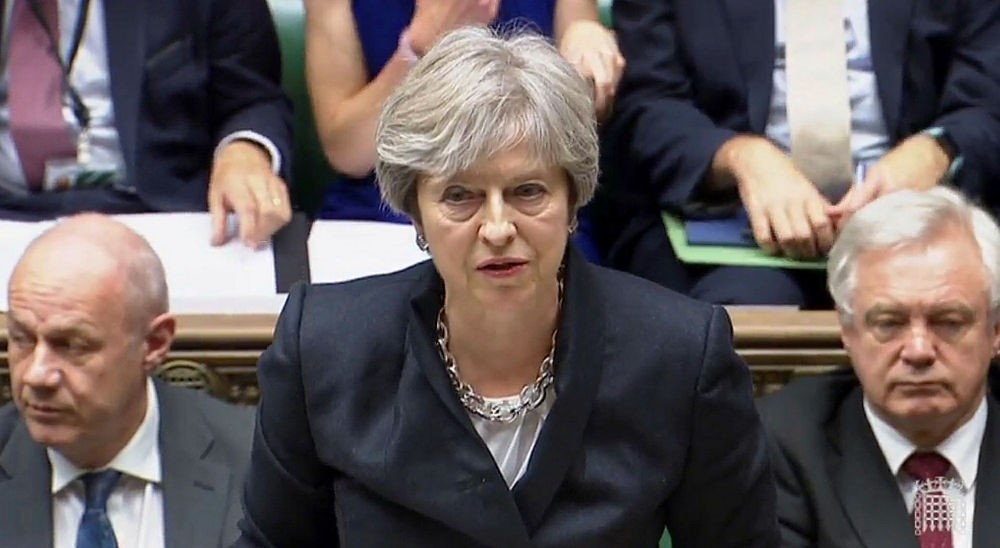 Britain's Prime Minister Theresa May addresses deputies in the House of Commons, London.
by Compiled from Wire Services Oct 11, 2017 12:00 am

Britain and its EU partners clashed over which side should make the next move to unblock Brexit talks, with both sides saying the ball is in the other's court

The EU and Britain clashed Monday after British Prime Minister Theresa May said the ball was in the EU's court as Brexit negotiations entered a critical fifth round.

This round of divorce discussions is the last before European leaders meet at a summit on October 19 to decide whether there is "sufficient progress" to move on to the trade talks that Britain desperately wants.

Brussels is particularly alarmed by the leadership crisis engulfing the British prime minister, who is facing a plot to oust her after a catastrophic, mishap-strewn speech at her Conservative Party's conference.

The embattled May told the British parliament that she expects "leadership and flexibility" from the other 27 EU countries in the negotiations.

"As we look forward to the next stage, the ball is in their court. But I am optimistic we will receive a positive response," May said.

But the European Commission, the bloc's executive arm which is leading the talks for the EU side, roundly rejected May's assertion that it was up to the EU 27 to take the initiative to advance the stalled talks.

"This is not exactly a ball game... but what I can remind you of is there is a clear sequencing to these talks and there has been so far no solution found on step one, which is the divorce proceedings," the commission's chief spokesman Margaritis Schinas told a press conference. "So the ball is entirely in the UK court for the rest to happen," he said.

"Brexit is not a game," the European Union's chief negotiator, Michel Barnier, told British reporters yesterday when asked if the ball was in the EU's court to make the next move.

More than a year has passed since Britain voted to leave the EU, and six months since Britain triggered the two-year countdown to its EU exit. A fifth round of divorce negotiations opened Monday in Brussels, with both sides frustrated by the lack of progress.

Britain is keen to start negotiating as quickly as possible the terms of its future relationship with the EU, including a transition period, after it leaves the bloc in March 2019. But the EU does not want to start such negotiating until London and Brussels agree the terms of the divorce - citizen's rights, border issues in Northern Ireland and, crucially, how much money Britain owes the EU.

"We hear from London that the UK government is preparing for a "no deal" scenario. I would like to say very clearly that the EU is not working on such a scenario," European Council President Tusk said in a speech in Brussels.

"We are negotiating in good faith, and we still hope that the so-called 'sufficient progress' will be possible by December. However, if it turns out that the talks continue at a slow pace, and that sufficient progress hasn't been reached, then – together with our UK friends – we will have to think about where we are heading," he said.

The talks have stalled on all three of the key divorce issues; the exit bill Britain must pay, the rights of EU citizens living in Britain and the fate of the border between Northern Ireland and Ireland. The questions over May's leadership have seriously damaged hopes that a speech she gave in Florence in September, which contained key concessions, could give a "new dynamic" to the talks.