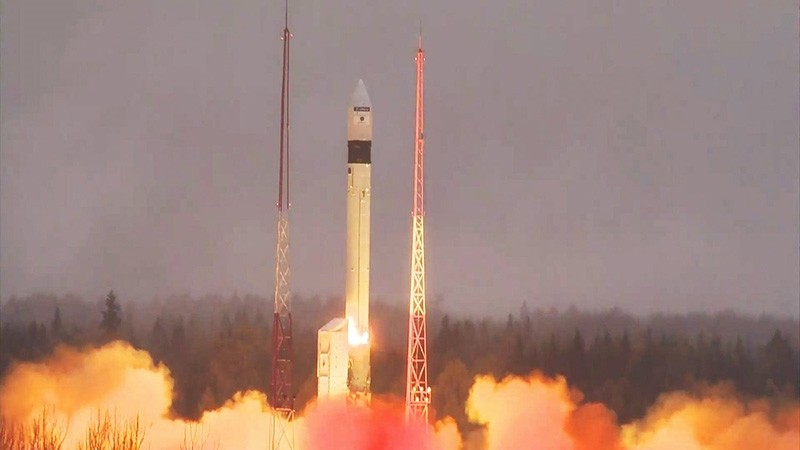 The European Space Agency's Sentinel-5P satellite was launched by a Rokot missile from the Plesetsk launch pad in northwestern Russia. The satellite will map the atmosphere every day.

After separating from the upper stage booster, the satellite deployed its solar panels and began communications with Earth, the ESA said. The first signal was received 93 minutes after launch as the satellite passed over the Kiruna station in Sweden.

Controllers at ESA's operations center in Darmstadt, Germany, then established command and control links allowing them to monitor the satellite's condition.

"The Sentinel-5P satellite is now safely in orbit so it is up to our mission control teams to steer this mission into its operational life and maintain it for the next seven years or more," the agency's director general, Jan Woerner, said in a statement.

The satellite -- carried by a Rokot, derived from the former Soviet intercontinental ballistic missile -- left behind billows of yellow smoke amid an autumnal landscape of boreal forest, footage showed earlier Friday.

The launch and the early orbit phase will last three days, and the mission is slated to begin full operations in six months, the ESA said.

It is the first satellite dedicated to monitoring the atmosphere for Europe's Copernicus project, a joint initiative of the European Union and the ESA to track environmental damage and aid disaster relief operations.

It was the sixth satellite to join the Copernicus constellation. Others launched since April 2014 monitor forest cover and land and water pollution.

The mission will contribute to volcanic ash monitoring for aviation safety and for services that warn of high levels of UV radiation causing skin damage. The measurements also will help understand processes in the atmosphere related to the climate and to the formation of holes in the ozone layer.

"Once operational, Sentinel-5P will map the global atmosphere every day with a resolution as high as 7 kilometers x 3.5 kilometers," the ESA said this week.

"At this detail, air pollution over cities can be detected."

The satellite is carrying a state-of-the-art Tropomi monitoring instrument that can map trace gases such as nitrogen dioxide, ozone, methane, carbon monoxide and aerosols that "affect the air we breathe and therefore our health, and our climate," the agency has said.

A recent report estimated that more than 400,000 people die prematurely in Europe alone because of air pollution.

The Copernicus program is named after the 16th-century Polish astronomer Nicolaus Copernicus, who determined that the Earth orbited the sun, and not the other way round.