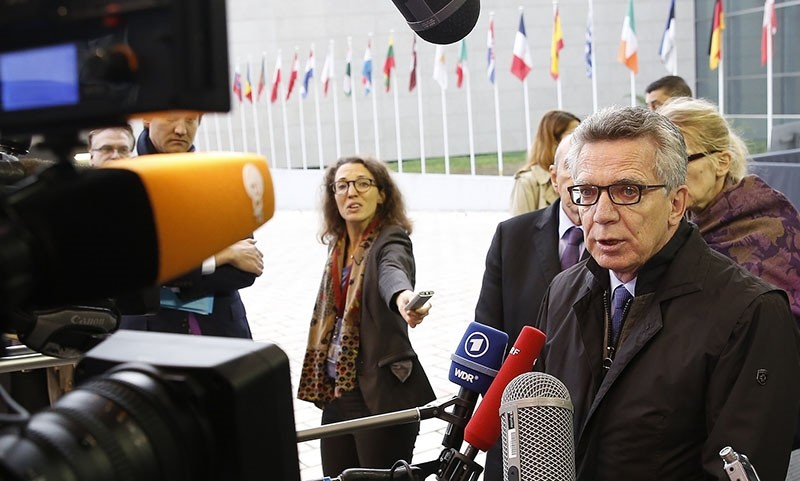 German Interior Minister Thomas de Maiziere speaks to media at the start of the Joint Justice and Home Affairs Council meeting in Luxembourg, 13 October 2017 (EPA Photo)
by Compiled from Wire Services Oct 14, 2017 12:00 am

A senior member of Chancellor Angela Merkel's party has been rebuked by his own political allies for suggesting that Germany might introduce public holidays to celebrate the Islamic religion.

Interior Minister Thomas de Maiziere told a party rally in northern Germany this week that he was willing to discuss Islamic holidays in areas with large Muslim populations.

There are an estimated 4.7 million Muslims in Germany, mostly immigrants from Turkey.

Alexander Dobrindt, who also belongs to Merkel's conservative Union bloc, told the daily Bild Saturday that he was against Islamic holidays: "Our Christian heritage isn't up for negotiation."

"For us, the introduction of Muslim holidays is out of the question," he said.

Social Democrat leader Martin Schulz meanwhile said Saturday that the idea was worth "thinking about," according to the DPA news agency.

Schulz said he was surprised that the idea had come from the interior minister who he said was usually known for having "very little imagination" in this area.

De Maiziere had previously called on immigrants to respect the German "Leitkultur," culture of reference, a term regularly used by the far-right.

A spokeswoman for the Interior Ministry said the northern city states of Hamburg and Bremen had signed agreements with some Muslim organizations so that Muslim pupils could have such time off school and workers could take holidays for festivals important to Islam, adding that some other states did the same.

Merkel's center-right Christian Democrats and their Bavaria-only sister party have been losing voters to the nationalist Alternative for Germany, which campaigns against Islam and large-scale Muslim immigration.