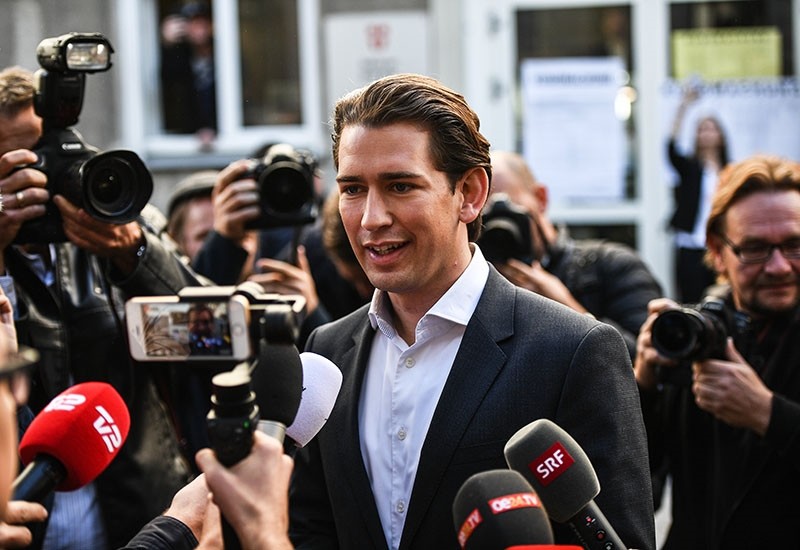 Austrian Foreign Minister Sebastian Kurz, the leader and top candidate of the Austrian Peoples Party (OeVP) answers media questions in front of a polling station after he cast his vote for the Austrian Federal Elections in Vienna, Austria (EPA Photo)
by Compiled from Wire Services Oct 15, 2017 12:00 am

Austria's anti-Turkey conservative People's Party (OVP) leader Sebastian Kurz won 31.6 per cent of the ballots in the parliamentary vote, followed by the Social Democratic Party (SPOe) with 26.9 per cent, according to the election night's final projection. His party is well short of a majority and could seek an alliance with the far right.

By winning the election, Kurz became Europe's youngest leader at the age of 31.

The liberal Neos party and the leftist Liste Pilz group are also set to be represented in parliament, with 5.1 per cent and 4.3 per cent. The Greens plummeted to 3.9 per cent and will likely have to lose their legislative seats.

The projection is based on 100 per cent of the regular ballots and includes a forecast of absentee ballots that will be counted by Thursday. The final result may end up 0.7 percentage points higher or lower.

Three parties, and two messages, were vying for first place in the general election: the center-left Social Democrats (SPO) were campaigning on reducing social inequality, while the People's Party (OVP) and far-right Freedom Party (FPO) have focused on concerns about immigration and anti-Islam rhetoric.

The latter two parties have called for securing Austria's borders and quickly deporting asylum-seekers whose requests are denied — ideas that appear to have been heard. The People's Party went into the election with the most support, according to polls, with the Freedom Party second and the Social Democrats third.

Much of the People's Party's appeal is due to its leader, known for his anti-Turkey and anti-Islam attitude, Foreign Minister Sebastian Kurz.

Since taking the helm in the spring amid growing strains between the governing Social Democratic-People's Party coalition, he has moved his center-right party further to the right, particularly on the issues of migration and Muslims. But he avoids the inflammatory rhetoric of the far-right Freedom Party and its head, Heinz-Christian Strache.

That makes Kurz's party appealing to voters sensitive about immigration in the wake of the 2015 mass influx of mostly Muslim migrants into the EU but who oppose the Freedom Party. Strache has modified the tone of his message and the party is keen on shedding its past links to anti-Semitism. But it continues to attract a neo-Nazis.

Kurz, greeting supporters as he cast his vote, said he hoped for "a good result, so that real change can be possible." Expressing optimism at another polling station, Social Democratic Chancellor Christian Kern said "we are planning a longer party."

More than 6.4 million Austrians were eligible to vote. The last polling stations closed at 1500 GMT (11 a.m. EDT). Final results aren't expected until later this coming week, when the last of the absentee ballots and ballots cast at polling stations outside a voter's district are counted.