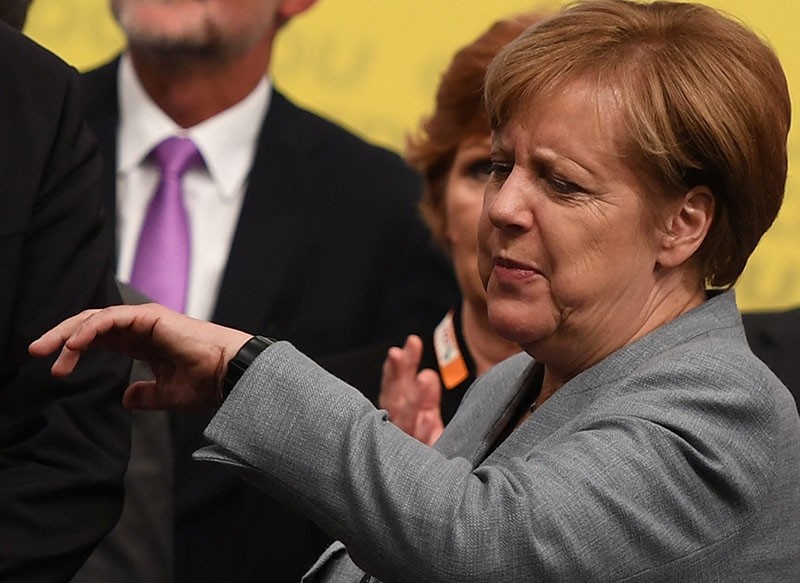 erman Chancellor Angela Merkel take a look at her watch after a campaign event of Christian Democratic Union (CDU), in Osnabrueck, Germany, 13 October 2017 (EPA Photo)
by Compiled from Wire Services Oct 15, 2017 12:00 am

Germany's Social Democrats (SPD) won a snap state election on Sunday in a setback to Chancellor Angela Merkel's conservatives in a poll that paved the way for the populist Alternative for Germany (AfD) to enter its 14th regional parliament.

Merkel's rival the Social Democratic Party (SPD) won the elections by boosting its support to 37.7 percent, up from 32.6 four years ago, according to projections by public broadcaster ARD.

The Christian Democratic Union (CDU) only managed to win 33.7 percent, down more than 2 percent compared to 2013.
Popular SPD Premier Stephan Weil led his center-left party to victory in the election in the central state of Lower Saxony, providing the SPD with a much-needed confidence boost after a string of state election losses and a debacle at last month's national poll.

The SPD returned to power with 37.2 per cent of the vote after increasing its support in Germany's second biggest state by 4.6 percentage points.

Stephan Weil, the SPD's incumbent premier, said the Social Democrats will hold talks with all parties except for the far-right Alternative for Germany (AfD) over options for forming a stable coalition government.

Weeks after becoming the number three party in the national parliament, the AfD also managed to win 6 percent in Lower Saxony, thus giving it seats in that regional parliament for the first time.

Sunday's election defeat weakened Merkel's hand ahead of talks in Berlin for a coalition government on the federal level.

Merkel's CDU and its sister party CSU won federal elections on Sept. 24, but failed to secure an absolute majority in the Bundestag.

Her CDU/CSU bloc is facing tough talks as its potential coalition partners -- the liberal Free Democratic Party (FDP) and the Greens -- differ on major issues such as Europe, migration, energy, and taxes.

Merkel said exploratory talks on forming a coalition government would begin on Oct. 18, with the CDU/CSU bloc holding separate discussions with the FDP and the Greens.

She said they are planning to hold a joint meeting with top officials of the four parties on Oct. 20.

The far-right AfD has been excluded by Merkel from any discussions.