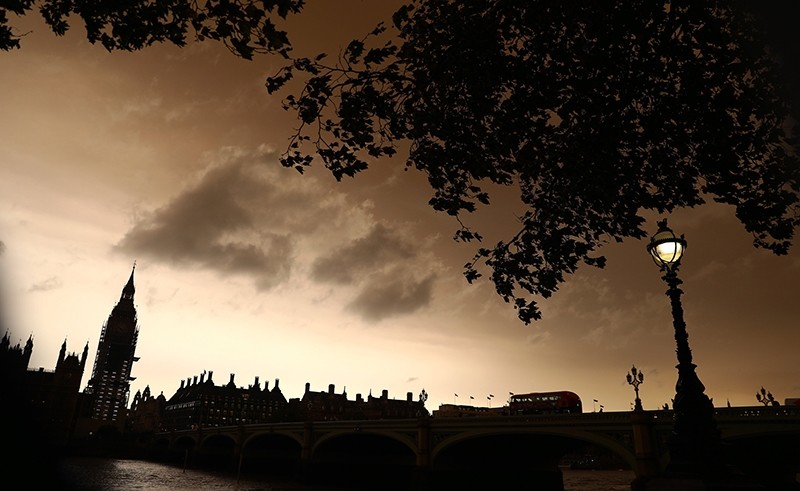 The sun shone red and the sky darkened to a foreboding orange and brown across parts of Britain on Monday, as Storm Ophelia brought dust from the Sahara and smoke from wild fires in southern Europe that filtered out certain wavelengths of sunlight.

Downgraded from a hurricane overnight, Ophelia caused two deaths in Ireland on Monday, where it was the worst storm in half a century.

Social media users shared pictures of ominous-looking clouds blocking out the sun, prompting London's Science Museum to joke on Twitter: "It's not the apocalypse!"

Many people expressed unease at the phenomenon, while others remarked it looked like something out of a science fiction movie -- with one wit predicting an alien invasion.

The prospect of the impending end of the world also drew inevitable comparisons with Britain's increasingly tortured withdrawal from the EU.

Met Office forecaster Grahame Madge said the unusual effect was caused by Ophelia, the hurricane now downgraded to a violent storm which battered Ireland on Monday.

"On the eastern side of the low pressure system air is coming up in the southern direction. Air is being pulled from southern Europe and Africa and that air contains a lot of dust," he said.

"It's certainly spectacular at the moment and quite a talking point, we've had a lot of calls about it."

As Ophelia has come up from the Azores, the storm has picked up Saharan dust from North Africa and picked up dust from wild fires in Spain and Portugal," a spokeswoman for Britain's Met Office also said.

"This yellowish hue is from the dust that is high up in the atmosphere and the blue element of the sunlight is scattered by the dust but the red element gets through so the sun appears redder and you get this sort of yellowish tinge," she said.