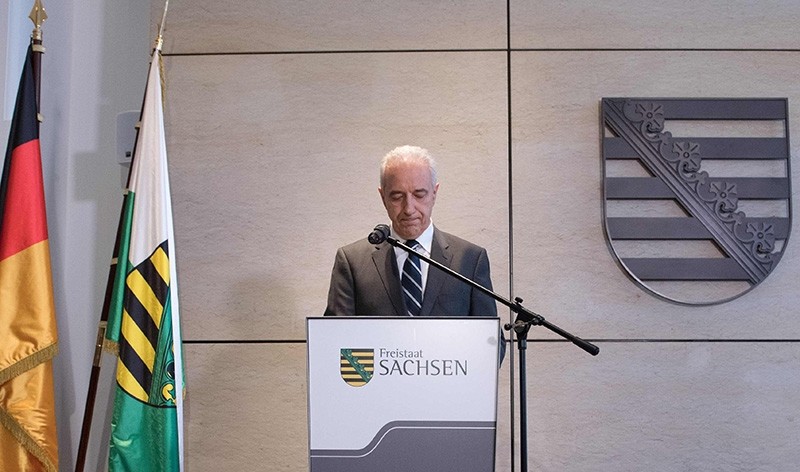 State Premier for the federal state of Saxony Stanislaw Tillich delivers a statement to resign at the State chancellery in Dresden, eastern Germany, on October 18, 2017 (AFP Photo)
by Compiled from Wire Services Oct 18, 2017 12:00 am

The conservative premier of the eastern German state of Saxony resigned Wednesday, saying a younger generation of leaders is needed after his party bled support to the far right in national elections last month.

Stanislaw Tillich's decision not seek re-election as leader of Chancellor Angela Merkel's Christian Democrats (CDU) in Saxony signals tension among her conservatives over the surge of the anti-immigrant Alternative for Germany (AfD).

The AfD won the most votes in Saxony itself in Germany's Sept. 24 general election, as conservative voters drifted to the hard right in protest at Merkel's decision in 2015 to welcome over a million mainly Muslim asylum seekers.

"Today we face big communal challenges," said Tillich, who had warned Merkel after the election that the weakened CDU must change course notably on immigration policy to stop a rightward shift in Germany's formerly communist east.

His criticism was echoed by Rainer Haseloff, premier of Saxony-Anhalt state where the AfD came in second after the CDU. Haselhoff said voters wanted guarantees that politicians were not forfeiting Germany's national identity.

Merkel has told CDU lawmakers that compromises would have to be made to make the complicated talks a success. The Greens, FDP and conservatives disagree on many key issues including immigration, Eurozone integration and environmental policies.

The Saxony CDU will hold a congress on Dec. 9 to elect a successor for Tillich.

The far-right AfD became the third-largest party in Germany's federal parliament after winning 12.6 percent of the vote in federal elections late last month.

It performed best in the former communist eastern states of Saxony, Thuringia, and Brandenburg.

In its campaign, the AfD attacked Merkel's open-door policy for refugees, arguing that the country faces the threat of "Islamization" especially after nearly one million refugees, mostly from Syria and Iraq, arrived since 2015.

The EU's largest economy has witnessed growing Islamophobia and hatred of migrants in recent years triggered by propaganda from far-right and populist parties exploiting fears over the refugee crisis and terrorism.