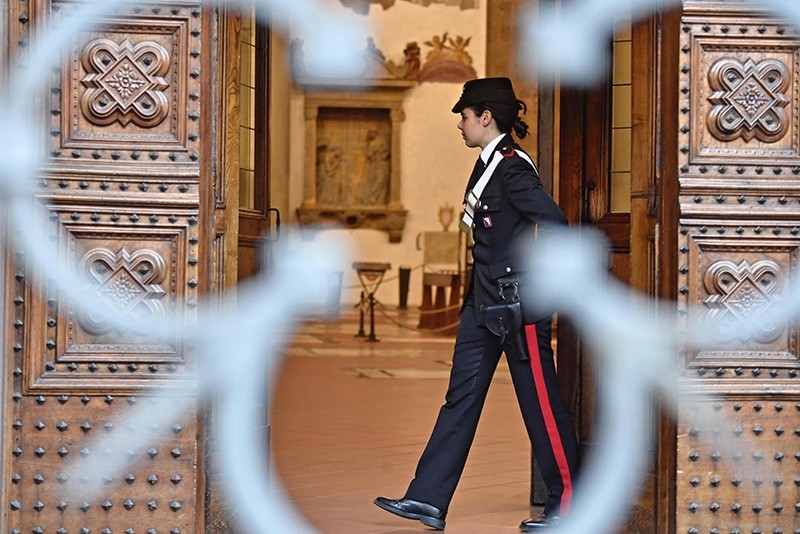 A police officer walks inside the Santa Croce Basilica after a 52-year-old Spanish tourist was killed by falling masonry in Florence, Italy (AP Photo)
by Oct 19, 2017 12:00 am

A Spanish man was killed Thursday when a falling fragment of stone struck him in Florence's Basilica of the Holy Cross, ambulance services said.

The church where Renaissance master Michelangelo is buried has been closed by police, a spokesman for the national fire rescue service said.

The square piece of stone, which was about 15 centimeters in diameter, fell from a height of around 20 meters, said a superintendent for Florence's artistic heritage.

It had supported a beam in the right transept of the basilica, the main Franciscan church in Florence and one of the city's most visited tourist sites.

Alongside Michelangelo, it contains the tombs of other famous Italian historical figures including scientist Galileo Galilei and philosopher and writer Niccolo Machiavelli.

Looking after thousands of years worth of art and architecture is a perennial headache in Italy, where efforts are also hampered by scanty state funding and bureaucratic holdups.

In 2012 Florence's 14th century, 85-metre-high bell tower, which stands next to the cathedral, was cordoned off after a piece of marble fell off it.

There have also been collapses at the ancient Roman site of Pompeii.

Irene Sanesi, the president of the Opera di Santa Croce, the body which runs the church, said she was "distraught" over the incident and offered her condolences to the victim's family.

She told Reuters that maintenance and restoration of the church had been "carried out constantly" in recent years with the help of Italy's civil protection agency.

"That is why we are truly stunned and astonished by what has happened," she said, adding that she did not know when the church would be reopened.